4 Reasons Why Charles Oliveira Is The New UFC Magnet

4 Reasons Why Charles Oliveira Is The New UFC Magnet 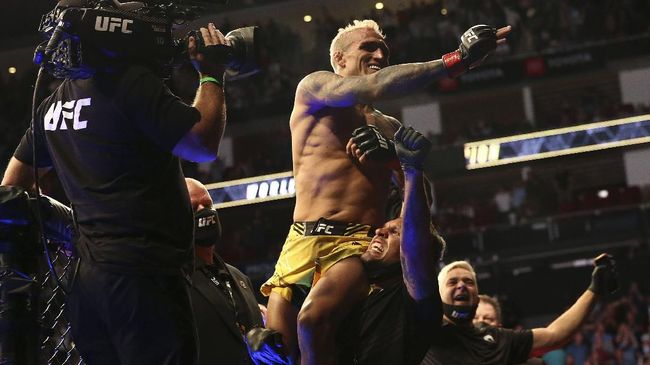 Charles Oliveira becomes the new king of the UFC lightweight class. Here are some interesting things that make Oliveira the new UFC magnet.

As the UFC lightweight champion, Khabib is a big magnet for the martial arts event. Khabib’s presence has helped increase the UFC’s popularity in various parts of the world, especially in the Middle East region.

Although it will be difficult to match Khabib’s popularity, Oliveira has a chance to at least be among the popular UFC champions.

Here are some things that make Charles Oliveira the new UFC magnet:

1. Status of the Submission King

Charles Oliveira is nicknamed the king of submissions because he has the most submission wins in UFC history, with 14 wins.

Overall, Oliveira even won 19 submission wins out of a total of 31 victories during his career.

This variation of Charles Oliveira’s submission technique makes every match he plays interesting and full of surprises.

Of the 31 victories he has won, Oliveira has won only three points, including last year’s win against Tony Ferguson.

In that match, Oliveira could actually armbar Ferguson but Ferguson was able to endure the pain and survive the lockdown.

This minimal record illustrates Oliveira’s match, which will always be interesting and finished before the final round is over. In Oliveira’s eight-game winning streak, he has won just once on points.

The rest, Oliveira wins via submission or KO / TKO. Oliveira’s duel against Chandler is proof of how exciting the duels involving Oliveira are.

When Khabib held the UFC lightweight champion belt, there were complaints that Khabib was playing too little. Since winning against Conor McGregor in 2018, Khabib has only fought once a year in 2019 and 2020.

Seeing the trend that Oliveira is going through, this Brazilian fighter is much more active than Khabib.

Oliveira can fight 2-3 times in one year. This year, at least Oliveira will once again go up the octagon to face the challenger.

4. No Burden of Unbeaten Record

In certain moments, Khabib Nurmagomedov is often said to be burdened with his unbeaten status in the UFC and MMA as a whole. This has become the ‘gap’ behind Khabib’s greatness so far. Khabib is considered too cautious because he has a mission to end his career by keeping this record perfect.

As a result, there were several matches when Khabib was considered ‘avoiding’, including when he canceled the duel against Tony Ferguson at UFC 249.

Charles Oliveira himself was familiar with defeat. He’s lost eight times already and that doesn’t put him too much burden on maintaining an unbeatable trend. Oliveira will be ready to face whoever is thrust in front of him.