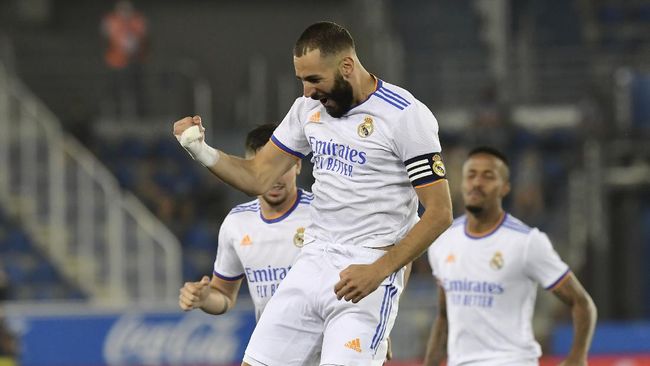 Karim Benzema has succeeded in making a series of sweet achievements with Real Madrid throughout the 2021-2022 season. One of them is to win the Spanish League 2021-2022.

Madrid has even locked this title in week 34 of the 2021-2022 Spanish League after beating Espanyol with a score of 4-0. Benzema also played a role in Madrid’s goal party by contributing one goal in the 81st minute.

Next, Benzema added to his success with Real Madrid this season by winning the 2021-2022 Champions League. Certainty was obtained after beating Liverpool in the final.

Playing at the Stade de France Stadium, Paris, France, Sunday (29/5/2022), Los Blancos – the nickname of Real Madrid – won narrowly with a score of 1-0 after a tight duel throughout the match. The only goal in this match was scored by Vinicius Junior in the 59th minute.

Not only making achievements with the club, Benzema also has a classy record individually. In the Spanish League this season, he won the top scorer status. Yes, Benzema is at the top of the list of top scorers in the 2021-2022 Spanish League after recording 27 goals from 32 appearances.

Apart from that, he also recorded 12 assists. Benzema’s goals were often scored in crucial moments that finally brought Madrid to victory.

Benzema collected a total of 15 goals this season. He is 2 goals ahead of Lewandowski in the top scorer list and up to 7 goals ahead of Mohamed Salah who became the most dangerous bomber at Liverpool.

The determination of the winner of the 2022 Ballon d’Or trophy is somewhat different from previous editions due to a change in the format. Yes, France Football as the initiator of the Ballon d’Or event changed the format for the 2022 edition. Changes include the assessment of players who are likely to win this award.

The performance that is judged on these players is only from August 2021 to July 2022. So, the assessment is only one full season, not a calendar year as before. With this change in format, players’ appearances at the 2022 World Cup in Qatar don’t count. The 2022 World Cup will be held from November 21 to December 18.

Later, appearances there will count for the 2023 Ballon d’Or. With this condition, Benzema’s steps in winning the 2022 Ballon d’Or trophy are believed to be increasingly smooth. Because, he really looks amazing throughout the 2021-2022 season.