ComeBack of Minions That We Can Learn

Home » Badminton » ComeBack of Minions That We Can Learn 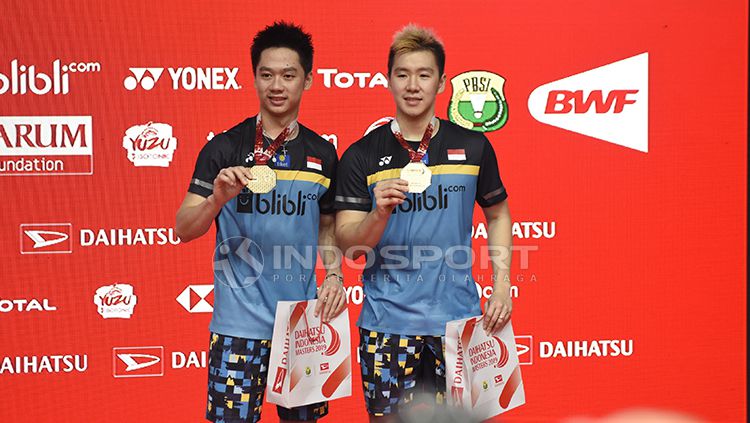 In terms of moving on from failure and returning to consistently show their best game, Indonesian badminton players must learn from Marcus Gideon and Kevin Sanjaya. This world number 1 men’s doubles pair deserves to be a role model on how to maintain enthusiasm and work ethic in the field.

They deserve to be examples not just for young players, but also for senior players. When many Indonesian players dropped out at the Indonesia Masters 2021 tournament for different reasons, it was a different story with Marcus and Kevin.

In fact, they are the only Indonesian players to appear in succession in the Sudirman Cup, Thomas Cup, Denmark Open, French Open, and Hylo Open. Moreover, they went all the way to the final of the French Open and won the Hylo Open.

After all, Marcus/Kevin can still appear with a stable performance in Bali. They have returned to their best form after the failure at the 2020 Olympics. In fact, with only a gap of a few days after appearing in Europe, of course their tiredness has not completely disappeared. However, they show professionalism as athletes.

Minions won the ticket to the semifinals–Marcus/Kevin’s nickname after beating their junior, Pramudya Kusumawardana/Yeremia Erich Rambitan with a score of 22-20, 21-17 in 42 minutes. Don’t imagine that victory in the ‘civil war’ match is easy because they ‘only’ face are their juniors. In fact, it is sometimes more difficult to face compatriots because they both know their respective strengths and weaknesses. Plus, young people are certainly motivated to beat their seniors and also their idol players.

Marcus/Kevin have experienced defeat by their juniors, Muhammad Shohibul Fikri/Bagas Maulana in the second round of the Denmark Open 2021 last October. Marcus/Kevin, who are seeded 1 in the men’s doubles, also faced stiff resistance from Pramudya (20 years) and Yeremia (22 years) especially in the first game.

Pramudya/Jeremiah appeared confident and pressed from the start of the match. They were able to match the fast pattern of Marcus/Kevin’s game. In fact, they had excelled by a 5-point margin at points 15-10, 17-12. However, in terms of maturity, especially facing crucial moments, this young couple still has a lot to learn from their seniors. They must be able to absorb knowledge from Marcus/Kevin on how to deal with moments at decisive points.

That’s what happened in the game. Pramudya / Jeremiah were followed at points 19-19. Then, there was a setting of 20-20 points. What happened then, Marcus and Kevin won the first game with a score of 22-20. In the second game, the match went tough again. Pramudya/Yeremia, who wanted to win by forcing a rubber game, had a 7-4 lead. In the second interval, the two pairs chased each other in the acquisition of points.

Their points were the same at 12-12 and 14-14. However, Marcus/Kevin started to leave their juniors at 17. The Minions closed the second game with a 21-17 victory. Hence, Marcus/Kevin are now Indonesia’s only hope in the Indonesia Masters. Only they qualify for the semifinals. That was after the women’s doubles pair who won Olympic gold, Greysia Polii/Apriyani Rahayu, who were defending champions, turned out to be stalled in the quarter-finals. Likewise with the mixed doubles, Hafiz Faizal/Gloria Widjaja.