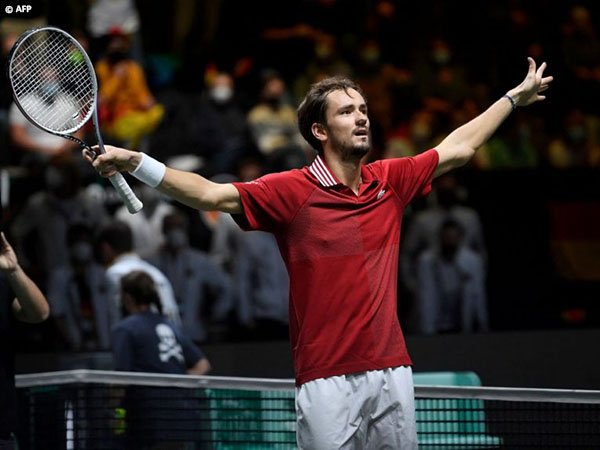 Daniil Medvedev and Andrey Rublev put in dominant performances in the 2021 Davis Cup Finals to lead Russia to victory over Germany in the semifinals.

In the first match in singles, world number 5 Rublev knocked out German Dominik Koepfer 6-4, 6-0. Rublev, who has also beaten Roberto Quiroz and Elias Ymer in this season’s Davis Cup Finals, won 84 percent of his first serve points and fired nine aces to take the win.

“The difference this match compared to other matches is that I feel I can win it quite easily. I didn’t have to put in too much effort and in the end I really felt relaxed,” Rublev said.

“I gave up when I played against other players. They started playing better, hitting better, then I either lost or won in three sets.”

“Another difference in this match is that from the start, I was very motivated, more focused on winning, playing as well as possible, not giving any hope to the opponent.”

The 25-year-old never looked in trouble against Lennard Struff after he made just six unforced errors and saved one break point opportunity he faced before sending Russia into the Davis Cup final for the first time since 2007.

At the top of the Davis Cup Finals, Russia will duel against the champions of the 2018 season, Croatia.

“I’m really happy for my team to be in the final. This week has been an amazing week,” said Daniil Medvedev.

“It will not be easy to play against Croatia. They have the best doubles team in the world, so we have to try to finish in the singles game, but we believe in the ability of our team members in doubles.”

With the doubles match now out of effect, Russia replaced Rublev with Karen Khachanov making her first Davis Cup Finals appearance this season, to play alongside Aslan Karatsev against Kevin Krawietz and Tim Puetz. Germany found some consolation after Krawietz and Puetz won 4-6, 6-3, 6-4 over Khachanov and Karatsev.