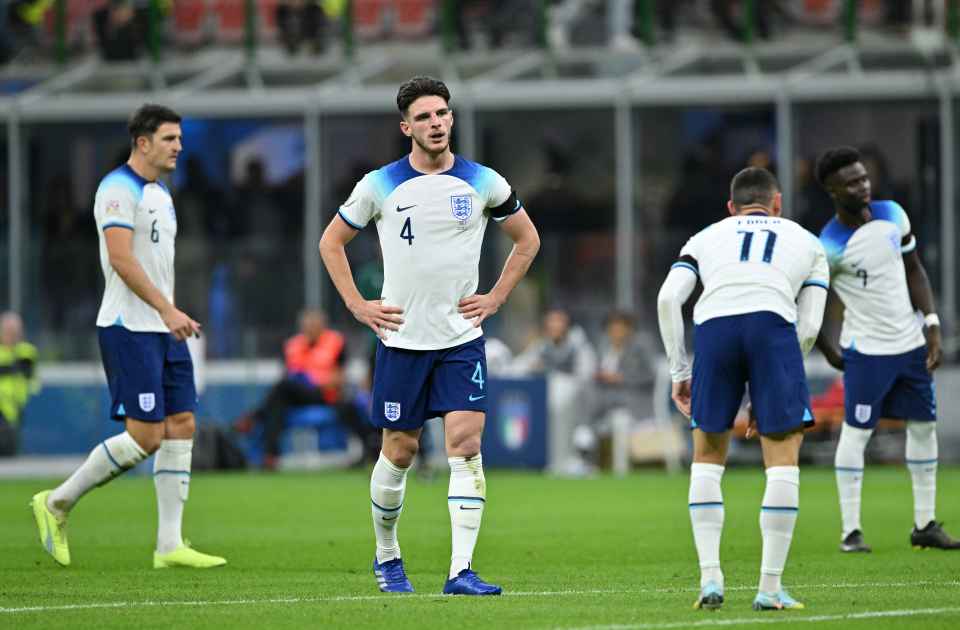 There were a number of contradictory scenes on matchday 5 of the UEFA Nations League which started last weekend. The sad fate experienced by the England national team which led to relegation and the victory of the Portugal national team which was marked by the bloody incident of Cristiano Ronaldo then took them to the top of the standings.

The Three Lions must recognize the superiority of host Italy at the San Siro, Saturday (24/9/2022). Giacomo Raspadori’s beautiful goal in the 68th minute made the difference in this match. England actually performed better than when they were humiliated by Hungary four goals without reply in the previous week. However, Gareth Southgate’s fleet could not maximize the opportunity. Instead of scoring goals, Nick Pope’s goal conceded.

England continued the negative trend since the start of the 2022/2023 UEFA Nations League season. Never won in League A Group 3. Two draws (1-1 vs Germany on the second matchday and 0-0 vs Italy on the third matchday) and three defeats (2 against Hungary, 0-1 and 0-4, and 0-1 to Italy).

England’s performance was so bad that it was only able to score one goal through Harry Kane from the penalty spot against Germany. These statistics put England on a par with a team like San Marino, not to mention “break the egg” goals from an open game scheme.

We can unravel Britain’s sad statistics further. Nirgol in the last three games as the worst since November 2020. Five games in a row without a win is a big stain for the Euro 2020 finalists. England have never carved a record as bad as this in the last eight years. Kane and his friends have to accept the risk. With two points and one game remaining, nothing can save them from relegation.

England who are stuck at the bottom of the standings, four points behind Germany, six points from Italy and eight points from Hungary at the top, have to accept the humiliating reality. Dropped into League B the following season.

We can explain at length why England’s performance has declined so much. There are many reasons that can be put forward. Including when they were unable to beat Italy, which was only a spectator at the 2022 World Cup this time. The series of heartbreaking results is clearly a red flag. The four-year football party in Qatar is just around the corner. In just a matter of months. England is one of the favorite teams to talk a lot in this grand event.

Does England still deserve to be seeded in the World Cup later? That’s a question mark that’s been bothering England fans so much. Disappointment over Southgate’s performance can only be accepted gracefully by the coach. Southgate argued, his team’s performances continued to progress. However, if in the end they are still intimate with defeat, the fans obviously can’t take it for granted.

After being knocked out of League A, Southgate still has one chance to steal the hearts of the fans again. As well as the momentum to prove that England is not as bad as imagined. That happened when they faced Germany on the last matchday on Tuesday (27/9/2022). An opportunity for England to close the group phase in the top caste with a sweet.

At the same time this is a betting match for Southgate and the players to welcome the World Cup. Southgate has not publicly announced the list of players who will be brought to Qatar. Most likely, he will only divulge the ammunition of his choice after that. The matches so far have been an opportunity for him to select, and at the same time become a material for his evaluation as the tactician.

Is the formation he uses reliable enough to at least match the achievement of being a semifinalist at the 2018 World Cup in Russia? Will he be able to realize his team’s status as one of the heroes with such a fleet? Or does he need to make drastic changes?

Admittedly, a poor result in the UEFA Nations League is a warm-up that was not expected. That minor streak couldn’t help but affect the confidence of the players, even Southgate himself. The fans who were so disappointed and the players who were so devastated was that the homework was not easy to complete in a short span of time.

After 439 days of losing on penalties to Italy in the Euro 2022 final at Wembley, England’s performance charts are actually moving in the opposite direction. The back line that has not been convincing. So is the attack sector. An acute goal crisis that needs to be resolved. The dependence on Harry Kane that hasn’t gone away. The appearances of Raheem Sterling, Phil Foden, to Jack Grealish were not as bright as at club level.

Declan Rice and Bellingham are yet to make an impact in midfield. Likewise, Bukayo Saka, who seems to have lost his magic at Arsenal. There are a lot of gaps and misses that Southgate has to find. There is still a little time before the opening match against Iran, the representatives of Asia who have just defeated a strong South American team, Uruguay in a friendly match.

There is still a chance for Southgate before the whistle blows on 21 November. Before finally England was really made even more embarrassed by his performance between Iran, the United States and Wales in the group stage.

Cristiano Ronaldo did not score in this match even though he had a number of golden opportunities. Even though he didn’t include his name on the scoreboard, CR7’s presence was still influential. The former Real Madrid and Juventus forward showed an unyielding fighting spirit. He showed that incidents on the field of play should not make a player give up.

Ronaldo collided in the air with Czech Republic goalkeeper Tomas Vaclik in the 12th minute. His nose was torn and covered in blood. With a bandage on his nose, Ronaldo continued the match. It’s a shame for him to end the game so soon. He even had time to give hope to the Czech Republic after his efforts to protect his nose from a ball that ended in a handball. Luckily, Patrik Schick failed to maximize the gift of 12 kicks at the end of the first half. The 26-year-old striker’s kick hit the post.

After that, Ronaldo made amends. He almost scored the fourth goal for Portugal after welcoming a corner kick. Ronaldo’s header was then completed by Jota to lock Portugal’s victory. Thanks to this victory, Portugal pushed to the top of Group 2. With 10 points, Portugal displaced Spain, who surprisingly suffered their first home defeat in three years at home to Switzerland.

Portugal is two points ahead of La Furia Roja. In contrast, the Czech Republic languishing at the bottom of the standings with a collection of four points, two points behind Switzerland.