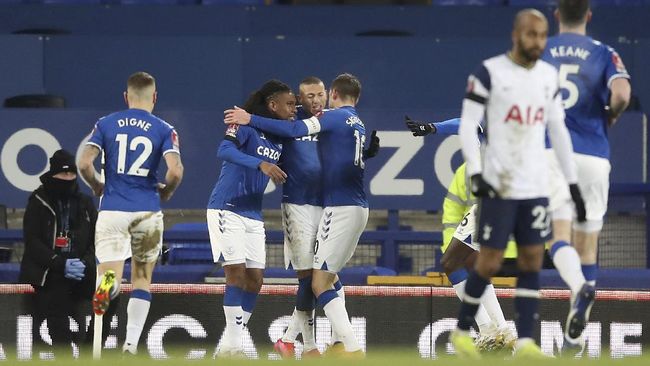 Everton and Leicester City secured tickets to the FA Cup quarter-finals after defeating their respective opponents in the fifth round on Thursday (11/1).

The Everton vs Tottenham duel is really draining. The two teams chase each other’s goals until the score draws 4-4 in normal time and forces the match to continue into extra time.

Spurs first took the lead through Davinson Sanchez when the match was over or entered the third minute. However, Dominic Calvert Lewin was able to equalize in the 36th minute.

Everton took the lead through Richarlison in the 38th minute before Gylfi Sigurdsson’s penalty in the 43rd minute made the score 3-1.

However, The Lilywhites didn’t want to just give up. Erik Lamela successfully cut the distance through a goal that was recorded in the final minutes of the first half.

Sanchez then drew 3-3 in the 57th minute, but Richarlison put Everton back 4-3 in the 68th minute.

Harry Kane became Tottenham’s savior from defeat through a crucial goal that was scored in the 83rd minute. The score is just as strong and lasts until normal time is over so the match is continued to the 2×15 minute extra time round.

The Toffees scored in the first half of extra time through Bernard and sent the Spurs back into the corner. Jose Mourinho’s team failed to respond and were forced to return home with their heads bowed.

In other matches, Leicester City first locked one ticket to the quarter-finals through Kelechi Iheanacho’s late goal just before the match ended.

Starting with a corner kick, Youri Tielemans’ ball was immediately thrown into the penalty box. Iheanacho was there and able to get the ball with a header.

Shortly thereafter the referee blew the long whistle and ensured that Brendan Rodgers’ squad stepped into the quarter-finals.

The match saw one goal stoppage for each team midway through the second half.

In the 65th minute, Andi Zeqiri, who was able to trick goalkeeper Danny Ward with a lob to find the ball into the Leicester goal, but on the sidelines the linesman had raised the sign of offside.

Two minutes later it was Leicester’s turn for the goal to be disallowed, because Cengiz Under continued to be in an offside position when he grabbed the ball from Youri Tielemans shot.

Seven minutes from time Brighton almost broke the deadlock when Alexis Mac Allister sent in a through ball which Zeqiri tried to finish, but Ward was able to secure the net.

Ward’s save proved crucial, because in injury time Iheanacho was able to score a goal to seal Leicester’s move to the quarter-finals.