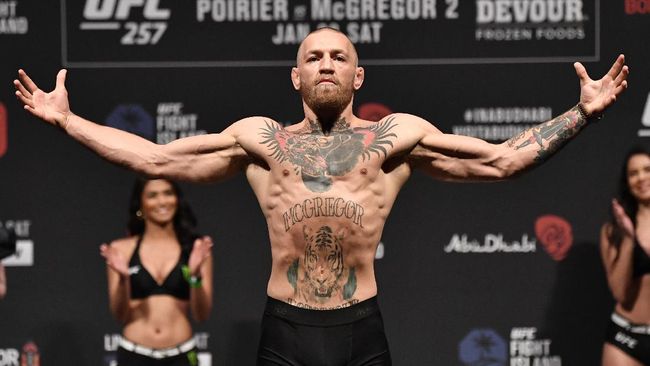 Conor McGregor lost to TKO for the first time in history after beating Dustin Poirier at UFC 257 at the Etihad Arena, Sunday (24/1).

McGregor, who was seeded unexpectedly, even collapsed during a rematch against Poirier. The Notorious, who continued to be hit by Poirier, lost by TKO in the second round 2 minutes 32 seconds.

The defeat to Poirier stained McGregor’s career. This is because the four defeats he experienced before have never happened because of TKO.

McGregor is actually a boxer who likes to win KO / TKO. Throughout his career, the 32-year-old fighter has won 19 KO / TKOs over his opponents.

After taking many victims, McGregor is now a victim after being defeated by Poirier through TKO. Meanwhile, the four defeats that McGregor have experienced have come through submissions.

This defeat was not only suffocating for McGregor but also made his chances of a rematch against Khabib impossible. Even if Khabib returned from retirement, McGregor would no longer be in the front line because Poirier managed to beat him.

In the fight against Poirier, McGregor actually excelled in round 1. The three judges who served at UFC 257: Ben Cartlidge, Sal D’Amato, and David Lethaby both gave McGregor a 10-9 lead over Poirier in round 1.

Unfortunately, McGregor was unable to maintain that advantage in round 2. Poirier managed to make McGregor’s legs hurt in the second round, causing The Notorious to lose focus.

Poirier then beat McGregor through the left hook and knocked McGregor down with the right hook. The referee then stops the fight when the second round runs for 2 minutes and 32 seconds.

Conor McGregor expresses his desire to face Dustin Poirier again. McGregor said this when he passed Poirier after a press conference session. The Notorious greets Poirier and pays homage to The Diamond’s win.

In a brief conversation with Poirier, McGregor also expressed his desire to have a third fight against Poirier.

“We’ll do it again. I respect what you do. Have fun,” said McGregor as he passed in a video uploaded by UFC on Instagram.

The victory over McGregor was the perfect revans for Poirier. The US fighter previously lost to McGregor in the first meeting at UFC 178 on 27 September 2014.

At that time, McGregor met Poirier at featherweight. McGregor only needed 1 minute 46 seconds to beat Poirier at UFC 178.

Referee Herb Dean stops the duel and gives McGregor a TKO win. This is the first time Poirier has suffered defeat by KO / TKO at UFC.