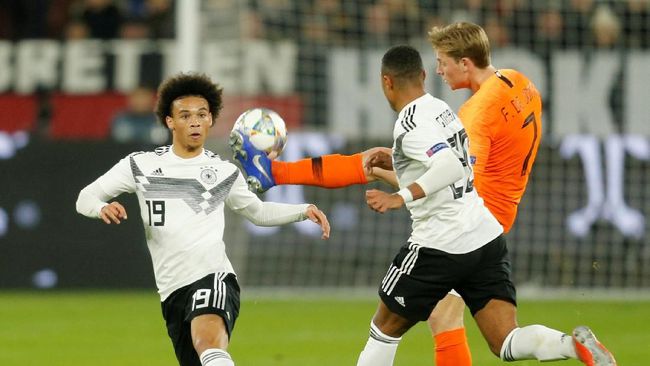 Germany team drew 2-2 with Netherlands in a UEFA Nations League match which took place at the Veltins Arena Stadiium, Gelsenkirchen, Germany, on Tuesday (19/11).

The host who seeks to win the first victory in the new Europe competition tried to suppress opponents since the beginning of the match.

Entering the ninth minute, Timo Werner brought Germany 1-0 up. The Leipzig RB striker fired a shot from outside the penalty box that was accurate after receiving Serge Gnabry’s pass. The ball that was kicked by Werner shot into the bottom right corner of the goal without being able to stop by Jasper Cillessen.

After scoring the opening goal, Werner had the chance to double Die Mannschaft’s lead. Germany’s second goal was scored by Leroy Sane in the 19th minute. Receiving a breakthrough pass from Toni Kroos, Sane controls the ball well. Matthijs de Ligt and Kenny Tete who tried to block Sane’s movement was unable to do much. The Manchester City player’s left foot shot made the ball hit Tete’s feet and slid into the Dutch goal.

Germany appeared comfortable by dominating possession. After the front line players scored, the defenders also appeared solid to reduce the threat of the Orange Team.

In the second half, Germany again became the ruler of the field. Joacim Loew’s team take advantage of empty spaces in the opponent’s area several times. The country that owns the four-time world title is able to design attacks well when it is in full possession of the ball and when using a counter-attack.

The new Dutch could get a golden opportunity in the 79th minute when Memphis Depay opened fire from inside the penalty box which Manuel Neuer was still able to secure.

The score on the scoreboard changed in the 85th minute. Quincy Anton Promes scores for Netherlands. The goal started from Daley Blind’s bait on the left side which was not able to be anticipated by The German defense. The ball was controlled by Frenkie De Jong who released the bait outside the penalty box to de Roon. Got feedback from de Roon, Promos then took off the ball and nested it on the left side of the goal.

Five minutes later, the Dutch scored the equalizing goal. The right-wing pass sent by Tonny Vilhena was completed with a right-footed volley by Virgil Van Dijk.

A score of 2-2 draw ensured the Dutch appeared as champions of Group 1 and advanced to the UEFA Nations League semifinals. Ronald Koeman’s side won seven points and on goal difference over France.

While Germany, which has been ensured relegation to League B, ended the UEFA Nations League this time without a win. Of the four matches, Germany only won two points from two draws and two defeats.