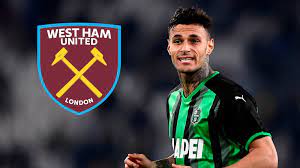 In this article, SportReviews will explain the complete statistics of Ginaluca Scamacca which is said to have terrible statistics.

West Ham United are believed to have reached an agreement with Sassuolo on the benchmark price for the transfer of Gianluca Scamacca.

The former Jong PSV player has scored 16 goals from 36 actions in the Italian League.

Scamacaa is the 4th signing that West Ham has brought in this summer’s transfer window.

Not to forget The Hammers also landed midfielder Flynn Downes from Swansea City.

Furthermore, Scamacca is already waiting for a new season that will start his career in the Premier League.

“I can’t wait to play and show the fans what I can do in a West Ham shirt, I hope we will love each other,” said Scamacca.

The Italian said he was very happy to be playing with West Ham and he had been looking forward to this moment.

Because Scamacca does have a dream to compete in the Premier League.

“I feel West Ham are the perfect team for me. They really showed they wanted me and when I spoke with the manager there was an instant understanding,” said Scamacca, quoted from West Ham’s official website.

Meanwhile, West Ham tactician David Moyes explained that the arrival of Scamacca was one of their targets in the transfer market this summer. Moyes is trying to sharpen the attack line for The Hammers.

“He’s present very well, and we are looking forward to working with him. He is a young center forward with a very bright future ahead of him,” explained Moyes.