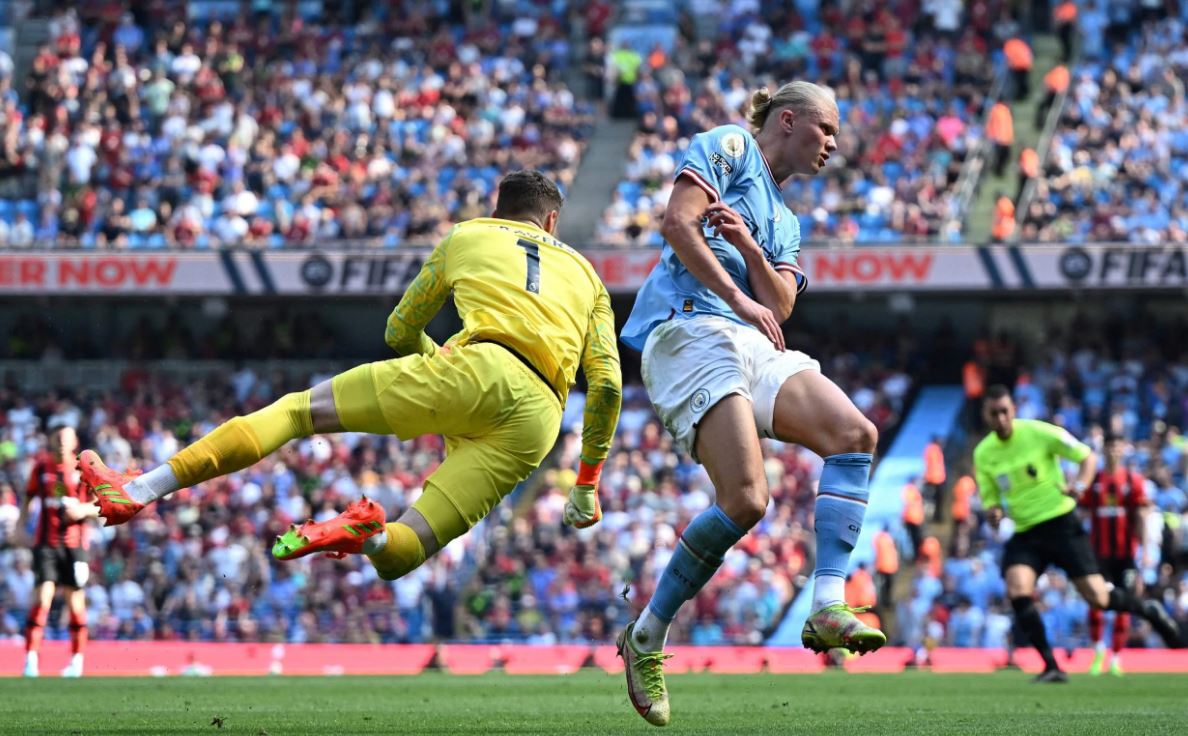 Manchester City returned to pack three points in their second match against Bournemouth, on Saturday 13 August 2022. The Citizens won with a score of 4-0. City started the season with two perfect wins without conceding. Blue Manchester is firmly at the top of the standings by packing six points with a productivity of six goals.

Manchester City use a 4-2-3-1 formation pattern. In defence, Kyle Walker (full-back right) and Joao Cancelo (full-back left), then Ruben Dias, Nathan Ake at centre-back. In midfield, Rodrigo is a defensive midfielder who moves statically to maintain depth, while Ilkay Gundogan moves dynamically to pick up the ball from below or play a role in attack. De Bruyne as an attacking midfielder in charge of flowing the ball forward.

On the left wing is occupied by Phil Foden and the right wing by Riyad Mahrez. Haaland became the target man who would receive a pass from the second line. City’s big win in the match against Bournemouth showed that City can stay strong when the tip of his attack, Haaland, was made defenseless with tight protection.

From the data presented by Whoscored, Haaland only made eight touches of the ball and released a total of two passes, one of which was an assist for the first goal from Gundogan’s feet.

Of those eight touches, a total of two shots were fired by Haaland and one was on goal. Haaland’s movements were very limited. Statistics also show that Haaland is only able to be given the opportunity to hold the ball eight times. Apart from these statistics, Haaland’s movement without the ball that cannot be counted in the statistics can contribute to Manchester City’s advantage in the first half.

From several pieces of the goal process above, it can be seen that three Bournemouth players focused on Haaland’s position who received the ball from Gundogan. They were actually more interested in Haaland than Gundogan who ran into the penalty box. As a result, Haaland gave the ball to Gundogan and scored the first goal.

In the process of the second goal, De Bruyne dribbled and Haaland again pulled two Bournemouth players to guard it and drew the offside line, which actually opened up space for De Bruyne to shoot and score.

This process is seen when the City’s attack pattern has genuine options. When the ball is at the feet of De Bruyne, from the perspective of the opposing defender, it is automatically sent to a Haaland. It was just like Haaland’s second goal against West Ham in the Premier League opener, where De Bruyne’s through ball was met by Haaland with a fine finish.

Judging from the match against West Ham, Bournemouth have read and are aware of Haaland’s movements. However, they did not reconsider how City’s second line is good at scoring goals. In fact, in previous seasons, the majority of City’s goalscorers were at the feet of a midfielder.

Both City full-backs were in the spotlight. Walker filled the midfield and helped drain the ball from midfield. In fact, Walker’s appearance against West Ham received praise from Pep Guardiola. “Today Walker was extraordinary, probably one of the best games he has played since we (Pep and Walker) were together,” Pep said in a press conference session after the match against West Ham, Sunday 7 August 2022.

Walker was Pep’s signing in his second season with City, namely the 2017/18 season with Danilo, Laporte, Mendy, Ederson and Bernardo. From Walker’s heatmap in the matches against West Ham and Bournemouth, Walker mostly holds the ball in midfield. This is a new evolution of a tactic used by Pep by giving Walker a more central function.

Meanwhile, Cancelo, against Bournemouth, was more flexible in exploiting the flanks, as can be seen from the heatmap above. Cancelo is also consistent as the player who has the most passes in one game. Cancelo scored an assist for an own goal from Bournemouth’s Lerma. This is thanks to the action taken by Cancelo when he overlapped the opponent’s penalty box to welcome a breakthrough from Grealish.

City still have a lot of games to go. Premier League, FA Cup, Carabao Cup and Champions League. Pep still has a capable squad depth. On the front lines there is still Julian Alvarez. In midfield there are still Bernardo and Calvin Phillips. The wing sector still has Jack Grealish. And what’s even more advantageous is when Foden becomes a player who can be put anywhere, such as wing, center forward, attacking midfielder and central.