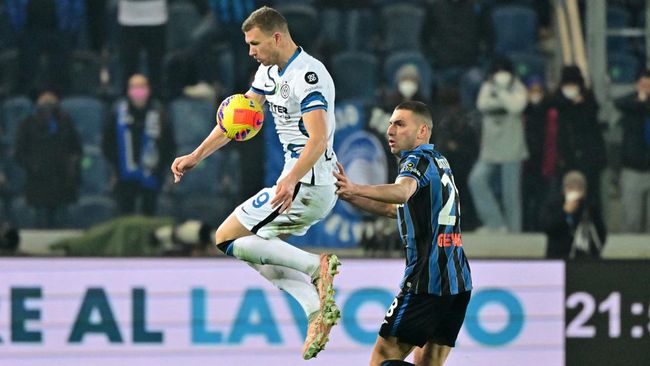 Inter Milan were held to a goalless draw by Atalanta in the Italian League continued at the Atleti Azzurri Stadium, Sunday (16/1).

Atalanta, who acted as the host, did not change their way of playing, by pressing the Inter Milan defense from the early minutes.

Despite appearing without their main striker, Duvan Zapata, Luis Muriel, who was down as a target man, appeared impressive on the front lines of La Dea.

However, Inter Milan, who played as the visitors, also did not want to lose, pairing Alexis Sanchez and Edin Dzeko up front, the Nerazzurri looked very promising when attacking.

Even Inter Milan scored its first opportunity in the early minutes of the match through Edin Dzeko’s header which bounced slightly over the crossbar.

Not long after, Marcelo Brozovic’s shot threatened the goal from Juan Musso, but his shot was still too weak.

Atalanta did not want to lose, they threatened Samir Handanovic’s goal through the execution of Mario Articleic which could still be secured.

The tempo of the game went fast since the early minutes, buying and selling attacks were carried out by both teams.

The best chance from Inter Milan in the first half came in the 27th minute, through Alexis Sanchez’s hard kick.

Matteo Pessina instead threatened the Inter Milan goal with a header, but the ball was easily saved by Handanovic. The score is as strong as 0-0 is the result of 45 minutes of action.

Entering the second half, buying and selling attacks occurred. Dzeko almost broke the deadlock in the 71st minute. However, his header in front of goal when receiving Dumfries’s bait instead bounced over the bar.

Atalanta turned threat through Merih Demiral’s header in the 79th minute, but his header was still off target.

A minute later Luis Muriel won the duel in the Inter defense and only faced Handanovic. Unfortunately, his shot can still be blocked by Handanovic.

Inter came close to winning the game dramatically through Danilo D’Ambrosio who already faced the Atalanta goalkeeper. However, his shot into a tight angle still hit the post.

A goalless draw was also an ideal result for both teams until the long whistle sounded.

Previously, the Nerazzurri managed to grab nine consecutive wins in Serie A. Despite failing to pick up three points, Inter Milan is still comfortably at the top of the standings. Inter gain 50 points from 20 matches. They are eight points ahead of Atalanta who occupy fourth place.