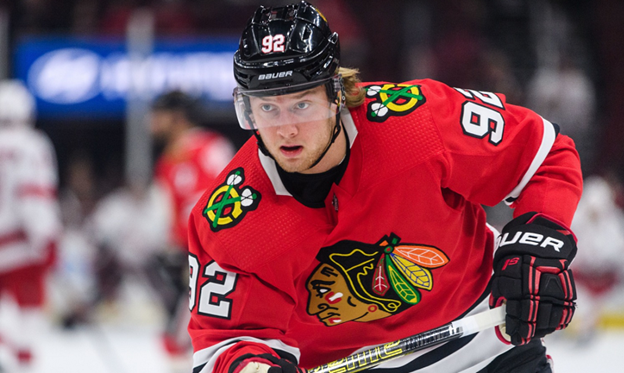 Chicago Blackhawaks forward Alex Nylander could miss the 2021 season with a left knee injury. The 22-year-old was injured during the last NHL playoffs.

According to the timeline provided by the Blackhawks, Nylander is expected to be out until at least the third week of April.

“He initially rested and trained conservatively. Unfortunately, his symptoms came back when he started to skate.” Terry said in a statement.

Nylander went under the surgery on Monday to repair a meniscus tear in his knee, and he is expected to be off the game for four to six months.

The Blackhawks were hopeful the inconsistent Nylander might be able to step forward this year. But the shortened 56-game schedule ends in May, giving Nylander a little window for a possible comeback.

Nylander was drafted by Buffalo with the No.8 pick in the 2016 draft. He was traded to Chicago in July 2019 for Henri Jokiharju, another former first-round pick who has become a promising young defenseman for the Sabers.

Nylander has scored 10 goals and 16 assists in 65 games in his first season with Chicago. He has sacored 13 goals and 19 assists in 84 career NHL games.

Blackhawks has announced a 56-game schedule for the 2020-21 season. They will begin play on Wednesday, January 13 at Tampa Bay and play their home opener at the United Center on Friday, January 22 against Detroit without fans.

“The health and safety of our fans, players and staff remains our top priority, and after careful consideration in collaboration with the NHL, city and state officials,” Blackhawks said in a statement.

“The Blackhawks will not be hosting fans in the United Center for the beginning of the 2020-21 NHL season. We will continue working with the league, city and state officials to evaluate conditions to determine if there is a timeline that would allow for fans later this season.” they added.