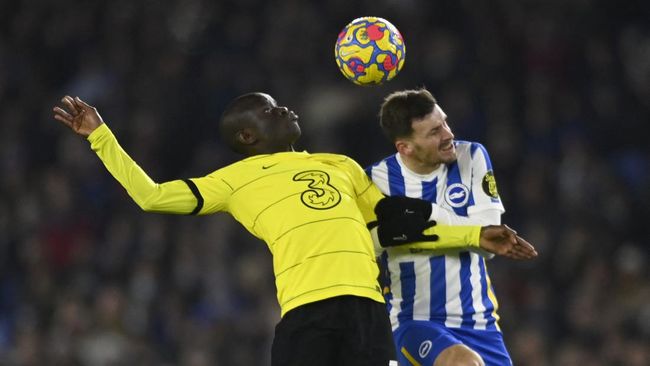 The Premier League continued, Brighton surprisingly managed to hold Chelsea to a 1-1 draw.

Brighton vs Chelsea match is presented on Tuesday (18/1/2022). The match which was held at the AMEX Stadium was fierce.

Chelsea took the lead through Hakim Ziyech’s solo action in the 28th minute. However, they failed to take control of the game and were conceded in the second half by Adam Webster’s action (60′).

With this result, Chelsea failed to cut the distance from Liverpool and Manchester City in the top flight. The Blues remain in third place in the standings after failing to pick up valuable points in this match.

The London Blues tried to increase the tempo in the final 30 minutes, but Brighton are known for their tough defense at home. Finally Chelsea had to settle for one point.

The game had just started and Brighton immediately made a surprise. In the 3rd minute, Moder surprised the Chelsea defense with a thin backheel.

Chelsea then took over control of the match. The Blues had the ball and tried to build on the attack, 15th minute Azpilicueta’s volley forced Sanchez to make a save.

The Blues looked more and more comfortable controlling the ball and confining Brighton. Even so, Brighton’s defense proved difficult to penetrate until the 25th minute.

The 28th minute, Chelsea scored the opening goal. Unexpectedly, Ziyech fired a long-range shot after working with Kante. Brighton’s players and goalkeepers are not ready. Conceded lure Brighton to play more and more open. Brighton’s defensive line is high, trying to start the counter-attack as quickly as possible.

Hudson-Odoi got a opportunity in the 45th minute, but his execution was not optimal. The 0-1 score took the players to the locker room.

The second half continued, Brighton still maintained the same tempo as the first half. They played more offensively, even more daring to open defense.

The 60th minute, Brighton managed to score a reply. The scheme of corner kicks, Mac Allister’s pass headed by Webster into Kepa’s goal. Chelsea tried to increase the tempo to score the second goal, but Brighton defended really well. Until the 70th minute, the Blues had difficulty dismantling the opponent’s defense.

Thomas Tuchel made a number of substitutions to increase the tempo. Chelsea are clearly struggling to break down Brighton’s layered defence

Entering the final 10 minutes, Chelsea continued to try to break down the opponent’s defense, but Brighton defended very well. Even Brighton had the better chances. Four minutes of added time was not enough for an extra goal.

Until the referee blew the long whistle, the score remained 1-1 to end the match between the two teams.