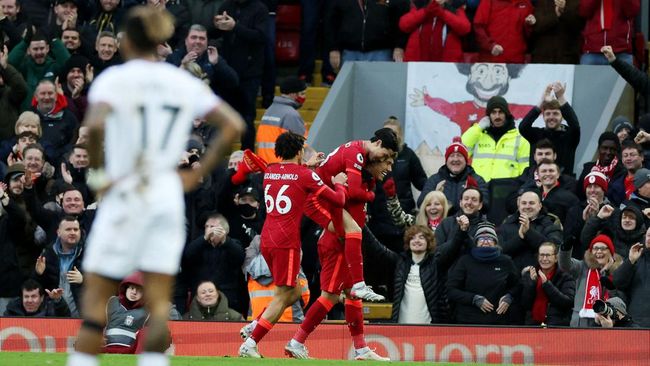 Liverpool managed to pick a convincing victory over Brentford with a score of 3-0.

Liverpool made two substitutions in the squad that previously faced Arsenal in the EFL Cup in this match. While Brentford only made one change in their starting XI. Liverpool dominated the game. They often force Brentford to play defensively.

Three Liverpool goals were scored by Fabinho, Alex Oxlade-Chamberlain and Takumi Minamino. This result makes the Reds collect 45 points from 21 matches and sit in second place in the 2021-22 Premier League standings, meanwhile the guest slumped to 14th with just 23 points from 21 matches.

Brentford tried to press first so the first half kickoff. But their efforts did not bother Liverpool too much. The Reds then dominated the match and played the tempo of the match while confining the visitors’ defense.

Opportunities obtained by Liverpool in the 13th minute. Chamberlain heads the ball from Fabinho’s cross. But the ball can still be pushed over by Fernandez. In the 20th minute, the opportunity was obtained from a set piece situation. Trent sent a free kick from the right side of the Brentford defense. The ball is sent to the far post where there is a freestanding Matip. Unfortunately the defender from Cameroon failed to grab the ball.

In the 22nd minute, Liverpool almost scored a goal. From a corner kick, the ball failed to be driven by the Brentford defense and fell to Van Dijk’s feet in the middle of the penalty box. He then released a left-footed shot but the ball was still blocked by Fernandez’s feet.

The duel then took place tough because Brentford played patiently and waited for the opportunity to release a counterattack.

Liverpool finally scored in the 44th minute. Trent took off a corner kick from the right side of the defense. The ball went to the far post and was finally headed into the net by a free-standing Fabinho. 1-0. This goal was the closing match of the first half. Liverpool 1-0 Brentford.

Entering the second half Liverpool tried to control the game again. They also tried to suppress the Brentford defense.

In the 49th minute, Liverpool got the chance through Fabinho’s volley. But the ball still leads right to the Brentford goalkeeper.

In the 67th minute, Jota got a golden opportunity. After getting feedback from Firmino and passing one Brentford player, he only had to face Fernandez. But his kick ball can be blocked by the goalkeeper.

But Liverpool can finally score again. In the 69th minute, despite being crushed by two opposing players, Ox Chamberlain found the net for Brentford with a header, capitalizing on Robertson’s cross from the left. 2-0.

In the 76th minute Liverpool managed to add to their goal treasury. This time through a substitute, Takumi Minamino. This goal came from Firmino who stole the ball from the goalkeeper to the Brentford midfielder. He had fed the ball to Minamino but it was fed back to the Brazilian. He then gave the ball back to the Japanese player and it was completed with a kick to the left of the opponent’s goal. 3-0.

After the goal, the tempo of the game slightly decreased. Liverpool are more comfortable controlling the ball while Brentford looks quite resigned even though they doesn’t stop chasing the ball here and there. In the 87th minute, the Reds got a golden opportunity through Kaide Gordon. But he failed to beat Fernandez in a one-on-one situation. In the end no more goals were created. Liverpool won 3-0 over Brentford.