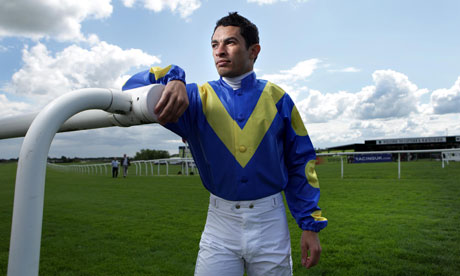 If ever a horse was made in the image of his jockey, then Gurkha Friend certainly mirrors Silvestre de Sousa and the pair racked up another win at Ripon.
The champion jockey has been on board for three of the six-year-old’s four victories at the Garden Racecourse – but his mount looked beaten a furlong out in the Weatherbys General Stud Book Handicap.
Up 8lb for his win at the track 18 days ago, Karen McLintock’s charge was taken on for the lead this time by Trading Point, before wrestling it back at the top of the straight.
Challenged by Frank Bridge, Dawaaleeb and then Storm Ahead, he was headed more than once before battling back to win by a nose as the 11-8 favourite.
“He loves the track and tries really hard,” said De Sousa.
“It got a bit tight on the rail when I got passed and he took a false step.
“He didn’t want to be beaten, though, and neither did I.”
McLintock said: “It was a terrific ride and the pair of them are so tough.
“He lost his confidence for a while with stomach ulcers and even today he didn’t want to leave the paddock.
“It just makes you wonder if he’s on his game or not, as he never used to be like that, but once he gets to the start he’s fine.”
She added: “When you only have a small string you get very attached to them.
“I thought he was going to get swallowed up, but he’s just so tough. I’ve no idea what’s next, we’ll have to see how much he goes up.”
De Sousa, who was given a two-day ban for using his whip above the permitted level, made it a double through Roger Charlton’s Savaanah (2-5 favourite) in the one-mile novice stakes.
David O’Meara could be tempted by Royal Ascot for Kuwait Station, who was a 16-1 winner on his debut in the British Stallion Studs EBF Novice Stakes.
Eyelool was the odds-on favourite after a good run at Newbury on his debut, but Phillip Makin’s mount won by a length and three-quarters.
“We’ll have to have a chat about Ascot after that,” said O’Meara.
“He looked good, if he can win like that despite doing so much wrong, then he’s obviously got plenty of ability. He’s very green and you’d think he can only improve.”
Another big-priced winner was Richard Fahey’s Claire Underwood (20-1) in the Follow At riponraces On Twitter Handicap.
“I was further back than I wanted to be and not really travelling,” said jockey Tony Hamilton.
“It was all going to depend on whether I got a run, but it opened up nicely. We’ve only had her a short while as she had two runs in Ireland.”
Mr Wagyu benefited from a visor for the first time to win the Free Daily Tips On attheraces.com Handicap.
The 17-2 chance just had enough in the tank to hold off Mutabaahy for Jason Hart and John Quinn.
The latter said: “He took a step in the right direction last time out when third at Redcar and the visor definitely helped.
“He’s genuine, but he can be lazy when he hits the front.”
Quinn and Hart doubled up with Wotabreeze (8-1) in the finale.