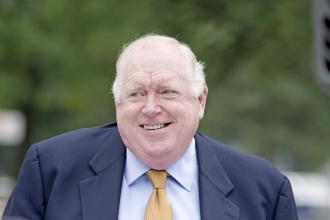 It was noontime in Saratoga Springs when Tom Durkin, the voice behind NY Horse Racing was wrapping up the program which he hosted for almost half his career for one last time. In pastel colors, he took his binoculars that were within his reach and grabbed the clipboard which contains the program sequence on that day. He was ever-ready to handle the program which he held close to his heart for more than 20 years.

Every time Tom Durkin speaks, both viewers and listeners are very much excited for the thrill of horse racing. Regular horse racing spectators see his hosting enjoyable as it always seemed to have a touch of laughter and knowledge. He definitely has a power to turn a two-minute competition from simple notes into a sweet melody. With his unique way of delivering speeches, it’s as if you can feel the movement of the horses and racers and totally experience a hard-earned success.

The 63-year old track legend’s smooth tone and his brilliant imagination have made over 80,000 events at county fairs and tracks in Wisconsin, Illinois, and Kentucky. He spent 25 years not only in NY racing but he also broadcasted famous races such as Triple Crown and Breeder’s Cup. He is truly a marvelous speaker, providing an oral account of contemporary thoroughbred racing.

After the 10th race last Sunday, which was held at the first racetrack of the United States, Durkin walked out of his office as a retiree. His final call of the Spinaway Stakes’ 123rd running matched the splendor of surrounding racetrack with his one-of-a-kind showmanship.

“Condo Commando is splish-splashing down the stretch in the Spa, and she’s all alone for the final furlong of the Spinaway,” he called out before resting his field glasses. Wise in his selection of words, he played it cool even with tongue twister-like sentences.

After the rain has ceased pouring, more than 38,000 horse aficionados roared and gazed at the man whom they consider as the best race announcer in thoroughbred horse racing history. It is one sudden adjustment for Durkin and somewhat a big challenge for the person who will become his future successor in horse race broadcasting.

From that day onwards, he will no longer begin each day composing a great speech using his notebook containing a compilation of words and phrases. He delivers his speech in freestyle which makes describing the speed and direction thoroughbreds sound natural and fascinating. Once he starts narrating the race itself, people tune into the game because his voice is so relaxing to listen to.

He is one legendary speaker that people, most especially the horse enthusiasts, will surely miss. His name will, without a doubt, be remembered throughout the horse racing history. On that last day as a race announcer, he was closely watched and interviewed by the media. Some even paid tribute to the priceless voice that everyone loves to hear during a horse race.

In one of his interviews, he said he will for sure watch the horses run for love of the game and because the racetrack is only six blocks away from his home. When asked about what’s in store for the voice of New York racing, he said he will travel once more to Italy and push through with some personal writing. In tears, he said his final words in thanking the public for their love and support to the equestrian sport.