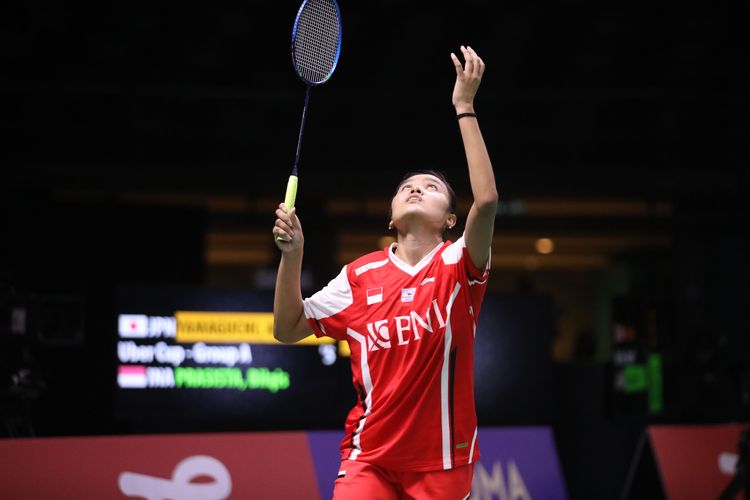 Indonesian women’s singles, Bilqis Prasista, admitted that she did not expect to beat Akane Yamaguchi in the first match between Indonesia and Japan in the 2022 Uber Cup. The Indonesia vs Japan match in the 2022 Uber Cup took place at Impact Arena, Bangkok, Thailand, on Wednesday (11/5/2022) ) morning local time.

Moreover, said Bilqis, Akane Yamaguchi is a player who is full of achievements. The Japanese mainstay single has won prestigious events such as the World Championships and the All England.

“I didn’t expect to win over Akane because she is the world’s number one player and has many achievements,” said Bilqis in a PBSI release. “Earlier my strategy was just how to make her run, I also had to be ready to endure and be enthusiastic. I can surprise you. My ranking is still far away, but I can win over Akane,” she said.

Bilqis realized that this victory was also thanks to messages from his parents who are Indonesian badminton legends, namely Joko Suprianto and Zelin Resiana. “I play carefree. I’m sure, in the game, nothing is impossible. Parents (Joko Suprianto and Zelin Resiana), also advised if you meet anyone, don’t be afraid and always have confidence,” she said. “Because nothing is impossible as long as we are willing to try and believe we can,” said Bilqis.

The victory made Bilqis very emotional. She even wanted to cry because she was able to win over Akane Yamaguchi. “Earlier on the field after confirming the win, I wanted to cry with joy because it was like a dream to win and make a surprise, but these tears did not come out,” she said.

“I am very happy to win and bring Indonesia 1-0 up against Japan. Hopefully my friends are also enthusiastic. Don’t be afraid and just believe in facing Japanese players who have good achievements and rankings,” Bilqis concluded.