When Indonesia Wins Thomas Cup 2020 Without the National Flag 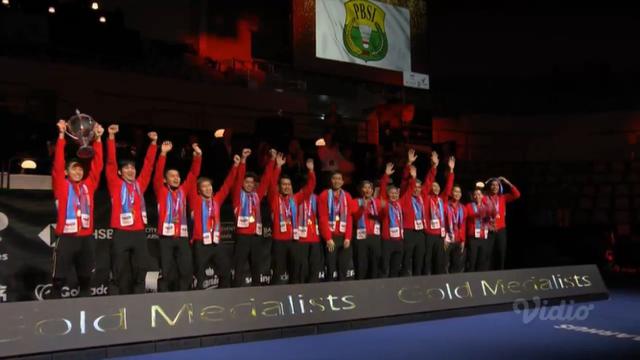 The Indonesian men’s badminton team won the 2020 Thomas Cup after defeating China in the final. The 2020 Thomas Cup final match between Indonesia and China took place at Ceres Arena, Aarhus, Denmark, Sunday (17/10/2021). As a result, Indonesia won 3-0 over China.

Men’s singles Anthony Sinisuka Ginting opened Indonesia’s advantage after winning over Lu Guang Zu. The badminton player who is familiarly called Ginting won three games with a score of 18-21, 21-14, and 21-16.

Ginting’s success was continued by Fajar Alfian/Muhammad Rian Ardianto who played as the first men’s doubles in last night’s final. Fajar/Rian who faced He Ji Ting/Zhou Hao Dong won straight games with a score of 21-12 and 21-19.

Jonathan Christie, who appeared in the third party, then completed Indonesia’s victory after fighting for 1 hour 22 minutes against Li Shi Feng. The 2018 Asian Games gold medal winner won with a score of 21-14, 18-21, and 21-13. Jonathan Christie’s success also ensured that Indonesia lifted the Thomas Cup trophy for the first time since 19 years ago.

However, this historic victory was less than perfect when the Red and White flag could not fly. When Indonesia took the podium, the national flag was replaced with the logo of the Indonesian Badminton Association (PBSI) flag. This happened following the sanctions imposed by WADA or the World Anti-Doping Agency on Indonesia.

WADA assesses that Indonesia does not comply with anti-doping procedures. In this case is the test doping plan (TDP) program. In addition, WADA’s punishment also prevented Indonesia from hosting sporting events.

The Head of PBSI’s Foreign Affairs Division, Bambang Roedyanto, said that the flag with the PBSI logo was only used for single events. If Indonesian badminton wins in multi-event events such as the SEA Games and Asian Games, the flag of the Indonesian Olympic Committee will accompany the athletes on the podium.

This WADA sanction has also been known by the Minister of Youth and Sports of Indonesia (Menpora RI) Zainudin Amali. Menpora Zainudin Amali revealed that the WADA sentence arose because Indonesia could not fulfill the 2020 and 2021 doping test samples. This was due to the cessation of sports activities in Indonesia due to the corona virus pandemic.

“It is true that we received a letter from WADA (in September) and it was deemed non-compliant. However, according to what WADA has conveyed in the letter, we have time to clarify. So the deadline is approximately 21 days,” said Menpora Zainudin Amali in virtual press conference on Friday (8/10/2021).

“Today we immediately coordinated with LADI to ask where our position was until it was said to be non-compliant. It turned out that this was more about sending samples. So it was non-comply because of our sample delivery. In 2020 we plan to provide samples. However, we didn’t expect that in March 2020 there would be a pandemic until now, so there are no sports activities that we can use as samples for anti-doping. This is what causes the sample not to be fulfilled,” said the Minister of Youth and Sports.

Zainudin Amali has sent a letter of clarification regarding the sanctions and has received a response from WADA. Zainudin said that WADA understood the condition of sports in the country, which had been stopped due to the corona virus pandemic. In addition, Zainudin also revealed that WADA was willing to wait for a doping test sample at PON Papua so that the minimum limit for Indonesia’s doping plan (TDP) could be met. The sample will be monitored through an accredited Japanese Anti-Doping Agency.