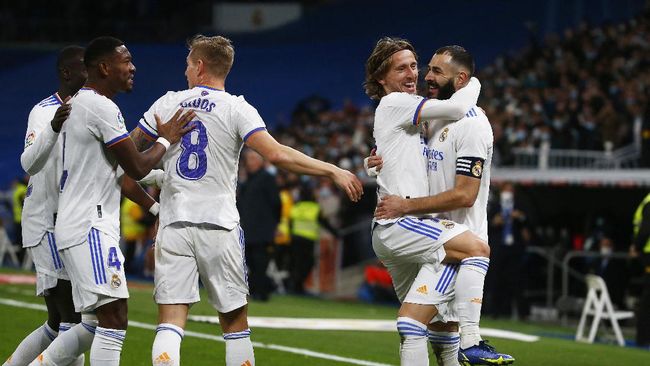 Real Madrid came out victorious in the one-city derby against Atletico Madrid with a score of 2-0 in the LaLiga Santander continued at the Santiago Bernabeu, Sunday (12/12).

Madrid looked good in this match. Los Merengues who appeared solid and tactical made it difficult for Atletico, who were not playing at the best level, to develop their game.

The match started with the onslaught of Atletico Madrid. The visitors played aggressively in the first 10 minutes. Real Madrid were forced to defend and wait for the moment of counterattack.

The high pressure line applied by Atletico made it difficult for Madrid to come out to build attacks. Madrid’s back line must work hard to stop Atletico’s fast attack.

Although depressed, Madrid actually took the lead in the 16th minute. Starting from a quick counter-attack, Vinicius ran through the right side of the penalty box and sent a pull bait for Benzema in the middle of the penalty box. Goal! Madrid 1-0 Atlético.

Madrid’s goal changed the balance of the game. Los Blancos had possession of the ball more often to build attacks, but until the 30th minute Atletico’s defense was still very tight.

In the 35th minute, Griezmann got a free kick opportunity on the edge of the penalty box. His execution was perfect into the top left corner of the Madrid goal, but Courtois still managed to make a heroic save.

The final 10 minutes of the first half belonged to Atletico who tried to increase the tempo of the attack, but no additional goals were created. The 1-0 score took the players to the locker room.

The match restarted with a tempo that was not much different. Madrid had more control of the ball and tried to adjust the tempo. Atletico are more defensive and waiting for a chance to counterattack.

The first 10 minutes went by quickly with no chance of ripening. Marco Asensio had a ripe opportunity in the 50th minute, but his execution was too slow.

The 57th minute, Madrid managed to score the second goal. Quick counter-attack, Vinicius ran down the left and sent a pass for Asensio who was free standing on the right. Once in control, Asensio fired low at the far post. Goal! Madrid 2-0 Atlético.

Atletico got a ripe opportunity through two free kicks in the 77th and 80th minutes. Lemar’s execution was perfect, but Courtois made another brilliant save.

2-0 advantage puts Atletico in a difficult position. The entry of Joao Felix, Thomas Lemar, and Luis Suarez was also unable to help Los Colchoneros to score goals in the second half.

Entering the final 10 minutes, Atletico tried to increase the tempo of the attack, but Madrid could defend well. Additional time 3 minutes is not enough for Atletico. Score 2-0 for Madrid’s victory.

2-0 score lasted until the referee blew the long whistle. The addition of these three points makes Madrid firmly at the top of the standings with an 8-point advantage over Sevilla, who occupies second place, while Atletico is stuck in fourth place with 29 points.