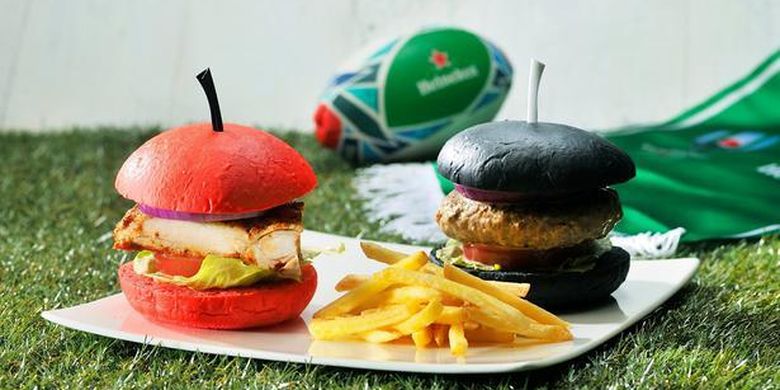 The 2019 Rugby World Cup Japan Tournament will be held in Japan from beginning of September this year. In order to support the event, many restaurants were inspired to make dishes that illustrate the colors of the national Rugby team uniforms of each country.

This time, we will introduce a number of Rugby-themed summer dishes that you can enjoy in Japan.

Seven underground commercial facilities of Tokyo Station, including GRANROOF and GRANROOF FRONT, also hold “Rugby Fair” until September 30, 2019. In this event there will be a variety of dishes that are only available at Tokyo Station.

Moreover, Kamukura Yamucharo Restaurant, famous for its new style of dimsum presentation, has launched a new menu called Spicy Challenge! Goal Conversation Kick Ramen (1,200 yen) inspired by the Rugby court. In this meal, Taiwan’s spicy ramen noodle acts as a field with hard-boiled eggs depicting Rugby balls, and scallions that represent grass. This dish is suitable as a summer dish in Japan.

Takenawa, which has a central restaurant in Tsukiji, also opened a branch here called Tokyo Kome Baru Takewaka. This restaurant serves bar-style cuisine using selected rice ingredients. The dish offered is “Yamato-don” (1,280 yen) in the form of a rice bowl made from Yamato-imo (a type of Japanese yam), and fresh red meat of tuna which illustrates the Japanese team’s uniform.

In addition to the above dishes, visitors can also enjoy various types of heavy food at the “Rugby Fair” event. If you use Tokyo Station when coming or returning to Japan, maybe you can try to stop by this event.

The Colt Cafe & Bar at the Continental Fuchu Hotel offers a limited-time menu inspired by rugby and cocktail drinks made with ingredients taken from the company’s own farmland, named Tohoku Bokujo.

Their Rugby Ball Omurice (1,620 yen) describes the Rugby Ball and its pitch. This luxurious dish is made from three eggs and herbal ingredients that are grown without using pesticides or other chemicals.

In addition, there is also a Cherry Blossoms drink (700 yen) which is inspired by the name of the Japanese national team, Brave Blossoms. This alcoholic cocktail is made from cherry blossom syrup handmade by Tohoku Bokujo’s farm.

Both of these limited menus are only sold until November 2019. If you intend to watch a Rugby match at the Ajinomoto stadium, don’t forget to try this menu too.