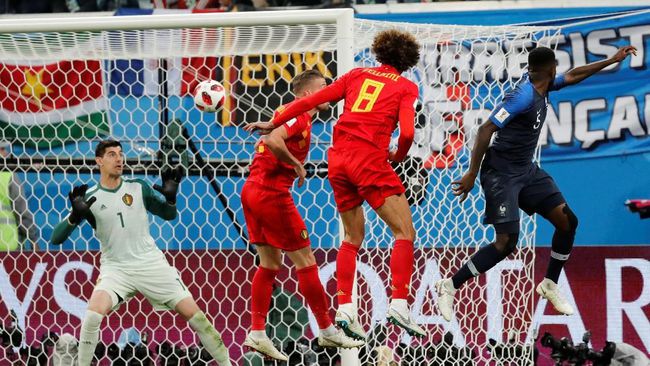 France qualified for the 2018 World Cup Final after beating Belgium 1-0 in a match at St Petersburg Stadium on Wednesday (11/7). Defender Samuel Umtiti became the hero of France’s victory through a header goal early in the second half. Umtiti’s header led France to qualify for the World Cup final for the third time.

The first round match was interesting. Belgium had more control over the ball, but France were still able to threaten through counterattacks.

France got two golden opportunities to score. However, Olivier Giroud’s chances in the 34th minute and Benjamin Pavard’s 39th minute failed to produce a goal because of a poor final finish. Draw score lasted until the end of the first half.

At the start of the second half, France successfully utilize the dead ball situation to score in the 51st minute. Starting from the corner of Antoine Griezmann, Samuel Umtiti managed to beat Marouane Fellaini in a duel of air and break through Thibaut Courtois goalpost.

Left behind one goal makes Belgium play more aggressive in building attacks. The Red Devils almost equalized in the 65th minute through Fellaini header. Through Dries Mertens cross, Fellaini beat Paul Pogba in the air duel, but his header was still thin on the left side of the goalpost.

The effort made Belgium successful confinement of France defense. But, France successfully showed a solid defense. Even Pogba several times looks more playing as a central defender than a midfielder.

Among the Belgium attacks, France almost scored a second goal in the 90th minute+3. But, Griezmann’s horizontal kick into the right-hand corner of the goal was captured by Courtois. Chelsea goalkeeper was also successfully dismissed kick by Corentin Tolisso in the 90th minute +5.

Six minutes of extra time given the referee could not afford Belgium to score a counterweight. 1-0 score for France to survive until the end of the fight.

This is the third time France qualified for the World Cup finals after in 1998 and 2006. In the final round at Luzhniki Stadium, Moscow, Sunday (15/7), France will meet the winners between Croatia vs England.