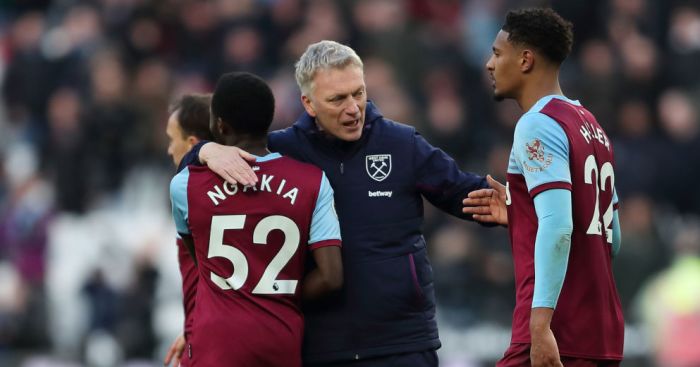 West Ham United are still competing for Champions League tickets when the Premier League has entered next gameweek. With few games remaining, The Hammers have the few number of points difference with Chelsea and Tottenham and only eight points adrift of third place, Leicester City. West Ham’s progress this season is quite surprising. Last season, they were almost relegated. They ended the 2019/20 season ranked 16th, only five points adrift of relegated Bournemouth and Watford.

West Ham’s success certainly cannot be separated from the role of the coach who is now getting a decent opportunity, David Moyes. Last season, Moyes also saved West Ham from relegation. Now, he not only brings the Hammers to a more stable position, but guides his team to disrupt the domination of big clubs like he did at Everton in the past.

This was Moyes’ first full season at the Hammers. Previously, it came only as a short-term solution. In 2017/18, Moyes replaced Slaven Bilic and helped the club stay in the Premier League. However, the Scotland coach was not permanent at West Ham, who chose to bring in Manuel Pellegrini.

This decision was proven to be wrong, because Pellegrini had difficulty lifting West Ham from the bottom in 2019/20. Once again, Moyes was tasked with saving the club from the brink of relegation. He was able to do it. However, Moyes’ true record is not good enough. In 2019/20, he only won five wins and nine defeats in 19 Premier League matches. Moyes’ points-per-match average was just 1.05.

The result was worse than Moyes’ tenure in 2017/18. He won eight wins and 10 defeats from 27 Premier League games that season. His average points-per-match is 1.22. However, the results were not so encouraging, in fact, did not make West Ham’s directors let him go. Moyes is still entrusted with completing the 18-month contract signed in December 2019. To prepare for the 2020/21 season, Moyes has plenty of time. The results were very positive for The Hammers public. “Last year when I arrived, the mission was to avoid relegation. And even before that [in 2017/18] it avoided relegation too. So this is the first time I have had the opportunity to lead the club from pre-season to the end of the season. And I managed to get them to compete around the top flight, “Moyes told the Evening Standard.

In recent seasons, West Ham has been synonymous with disappointing expensive transfers. They spent 38 million euros on Felipe Anderson, 18 million for Javier “Chicharito” Hernandez, and broke a club record transfer fee of 50 million euros for Sebastian Haller. All three failed to make a significant impact.

West Ham recruits have been much more effective since Moyes’ arrival. In the winter of 2020, he recruited Jarrod Bowen and Tomas Soucek. Soucek’s former team-mate Vladimir Coufal followed suit. The Hammers also brought in another EFL Championship star, Said Benrahma from Brentford. Jesse Lingard and Craig Dawson, two unused players at their respective clubs, were on loan at West Ham and performed well.

Soucek’s arrival has successfully transformed West Ham’s midfield. The Hammers are no longer loose in the middle thanks to the solid duet of Declan Rice and Soucek. In the Czech Republic midfielder, Moyes seemed to have found the new Marouane Fellaini. Soucek is not only important in maintaining game stability. His prowess from the second line and his aerial dueling ability also served as an outlet for West Ham’s dangerous attacks. He has scored 12 goals and an assist for the Hammers. This season, he became the club’s top scorer with nine goals, the same as Jesse Lingard.

Tomas Soucek’s 12 goals were scored from inside the penalty box. Meanwhile, five of the goals were scored from headers. Former Hull City star Jarrod Bowen has also continued to impress under Moyes. He is not only good at being an opportunity creator, but also deadly as a finishing option. This season, Bowen has scored eight goals and assisted five in the Premier League.

Bowen is a winger with two equally strong legs. His movements are also fast and agile. That ability makes Moyes often install him as a center forward, especially if Michail Antonio is injured. From the rise of West Ham this season, Jesse Lingard contributed with a sensational performance. At Manchester United, he was barely used. However, after wearing West Ham uniform, Lingard was able to look impressive. Even though he only arrived at the end of January, Lingard continued to score goals and became the club’s top scorer. Moyes managed to hone his potential and restore the 28-year-old’s confidence.

At West Ham, Lingard tends to play direct (direct) and is relied on as an outlet for counter attacks. Unlike at Manchester United, he is no longer required to create opportunities for his colleagues. Average key passes Lingard is decreasing at West Ham. Last season with the Red Devils, Lingard recorded an average of 1.64 per match. With The Hammers, his average key passes decreased to 0.82 per game.

Lingard also has a better shot-on-target ratio. He made 16 shots on target from 28 shots, nine of which resulted in goals. His average shots per match (2.83) are not much different from his best season at MU (2017/18). However, Lingard’s shot-on-target ratio has shown a significant improvement. At West Ham, Lingard managed to position himself as part of an efficient counter-attacking wave.

A similar story happened to Craig Dawson. Before coming to London Stadium, he had trouble getting minutes to play in the Championship with Watford. Moyes managed to reveal the ability of the English defender. In the West Ham squad this season, he is the defender with the best aerial duel success percentage (69.2%). Dawson has even scored three goals for the club.

Moyes managed to restore Lingard and Dawson’s confidence. These two players were immediately integrated into the squad. A positive dressing room atmosphere is the backbone of West Ham’s revival this season. Moyes managed to unite the players into one unified group. The close relationship between the coach and the players can be seen from the celebration of “Backstreet Moyes” by Lingard, Fornals, Rice and Soucek.

Moyes managed to tackle a potential problem early on. When Mark Noble publicly protested the sale of Grady Diangana, this issue was resolved properly and did not spread to performance. To manage the dressing room, Moyes himself has a fairly well-known staff at West Ham. One of them is Stuart Pearce and Kevin Nolan, who are former players of The Hammers. Nolan was the captain of the team when Rice and his generation were still training in the youth team.

This season, Moyes is still relying on the 4-2-3-1 system. The former Everton coach has also occasionally lowered a three-man defender scheme that changes to five defenders when defending. With these two formations, Moyes instructed his team to defend tightly and score goals via counterattack.

In defense, The Hammers try to close the space between the lines. West Ham tend to be passive, trying to close the space by maintaining the density between the back and midfield. Rice and Soucek were also the pivot for West Ham in the defense third. These two defensive midfielders are relied on by Moyes to stop the opponent’s attack and grab the ball to start a counterattack. Both of them do their part well. Rice and Soucek were the players with the highest number of intercepts at West Ham, 62 and 45, respectively.

The two full-backs also have to work hard on this scheme. The reason is, the tightly closed central area tends to make opponents divert attacks to the wings. Vladimir Coufal and Aaron Cresswell or Arthur Masuaku were also required to swiftly close the gap. Coufal is the player with the highest number of blocks (64) in the West Ham squad. Meanwhile, Cresswell (44), Masuaku (35), and left midfielder Pablo Fornals (43) were also diligent in blocking opponents’ attempts.

West Ham also developed a fast counter-attack which became their mainstay in scoring goals. The Hammers often field up to six players for counter attacks. Apart from the strikers, wingers and attacking midfielders, Soucek and a full-back also stepped up to help attack.

West Ham itself has a number of fast players to counterattack. The combination of Antonio, Lingard and Bowen is fast and dangerous. Said Benrahma can also be an option to coat them. In addition, West Ham also maximized their aerial ball ability to score goals. Apart from Soucek, four senior center-backs for The Hammers, Dawson (3), Diop (2), Ogbonna (2) and Balbuena (1) have scored in the Premier League this season. 12 of West Ham’s 42 goals have come from headers, the highest in the Premier League with Everton.

From set-piece situations, West Ham have scored 10 goals (the highest in the Premier League). The Hammers left-back, Aaron Creswell is a capable set-piece executor. Five of Cresswell’s seven assists were sent from set piece situations.

Throughout the club’s 126 years of existence, West Ham have never qualified for the Champions League. Now, Moyes has an open opportunity to bring The Hammers to this elite competition. The impressive gait with West Ham also became a redemption for David Moyes. Previously, the 57-year-old coach experienced three successive failures at Manchester United, Real Sociedad and Sunderland. The three failures damaged Moyes’ reputation. He has had success with Everton and Preston North End. However, all changed when Moyes became The Chosen One.

In 2013/14, Moyes failed to succeed Sir Alex Ferguson at Old Trafford. He only lasted 34 Premier League matches, only managed to win 17 wins and 11 defeats. Against top six rivals, Moyes has only won once out of 10 occasions. A series of negative results saw Moyes sacked in April 2014. At the end of the season, the Red Devils failed to qualify for the Champions League for the first time since 1995. After being sacked by United, Moyes took a break from his managerial career and worked at UEFA. He just returned to training in November 2014, handling Real Sociedad. However, the former Preston coach has had a hard time adapting to Spanish football. He was also sacked at the start of the 2014/15 season.

Upon his return to England, Moyes’ good name was getting worse. Appointed as Sunderland coach, he failed to save The Black Cats from the relegation abyss. They ended the 2016/17 season as Premier League caretakers and Moyes stepped down. Now, Moyes has managed to restore his reputation at West Ham. The Glasgow-born coach has shown that he can still compete in the Premier League. At London Stadium, Moyes managed to pay for his time and support.