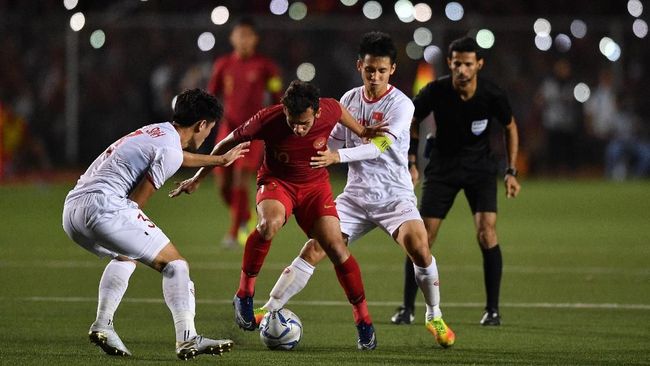 The word barbarian is not entirely true to show the loud game that was exhibited by The Golden Star at the Rizal Memorial Stadium, Manila, Philippines.

But, barbarians are also not entirely wrong if they refer to the violent violations leading to the rough chosen by Vietnam as one way to defeat Indonesia 3-0 in the final last night.

Indonesia actually looks different at the top match. The direction of Indra Sjafri’s squad who had played defending against Vietnam in the group stage, actually appeared attractive since the early minutes.

Vietnam was even forced to defend deeply to reduce the aggressive attacks of Indonesian players. However, how to survive Vietnam is really unusual. Almost all players seem to intend to harm the opponent.

The first evidence is Evan Dimas Darmono’s injury which occurred at the beginning of the fight, precisely in the 20th minute. The Indonesian playmaker collapsed after his ankle was trampled on by Vietnam defender Doan Van Hau.

Evan who had let go of the ball was even hit by Van Hau. Suddenly, the Barito Putera player grimaced in pain in the middle of the pitch before being carried out. He cried and had to calm by the coach Indra Sjafri.

The referee did indeed stop the match marking the violation. But, he did not give sanctions to Van Hau who appeared violent.

The next incident, Saddil Ramdani was intimidated by the opponent. The Indonesian winger lay while holding his neck after his movements were blocked by Huynh Tan Sinh.

The referee has not issued a card even though he blew the whistle sign of violation occurred.

The elbow elbowing movement seems to be a mainstay of Tan Sinh to stop the opponent’s movements. In the second half, the player with the number three back also did it to Firza Andika in a one-on-one duel at the corner of the field.

The referee does not consider this a violation. Yet in the replays Tan Sinh clearly deliberately elbowed Firza who was looming over him from behind.

Egy Maulana Vikri who entered in the second round, was also not free from the barbaric actions of the opposing players. He also had time to hold his neck after being followed by a Vietnamese defender.

A number of violent violations leading to the rough seem to be part of the tactics requested by Coach Park Hang Seo. Because, in terms of quality, Vietnam should be able to appear more civilized.

They are the favorite team of champions who impress throughout the tournament. Inhabited by a series of quality players, Vietnam, is able to play ball possesion very prominently. Indonesia has also felt it in the preliminary round.

Herein lies precisely the genius of Park Hang Seo. Although very capable of playing openly and attacking from the start, he chose the antithesis strategy in the final match.

Indonesia is allowed to have more balls. However, hardly any Indonesian players, especially in the wing sector, can get away with it.

The 3-5-2 formation chosen by Park successfully dampened the Indonesian attack based on the speed of the winger. Moreover, the metronome, Evan Dimas, has also been ‘turned off’ earlier.

Indonesia’s attractive game was practically blocked after Evan Dimas left the field. The creativity of the Indonesian attack became a stalemate when facing Vietnam’s compact defense.

Once again, Vietnam is actually very, very capable of playing attacking and open. However, they chose not to do it in the final match. This is a wealth of tactics from a Park.

The South Korean coach had read the Indonesian National Team game characters. He might even deliberately use barbaric methods to damage the mentality of Indonesian players.

Meanwhile Indra Sjafri was unable to find a solution after Evan Dimas left. His decision to replace Witan Sulaeman

Syahrian Abhimanyu who was revealed as a substitute did not appear very bad. But, he was unable to arouse the mentality of the dropping players without Evan Dimas.

Despite dominating possession, Indonesia’s attack seemed deadlocked. A number of experiments built by Osvaldo Haay, Saddil Ramdani, or Egy Maulana Vikri who entered in the second round, always stuck with Vietnam’s barbaric defenses.

Osvaldo, who was plotted as the spearhead, lacked ‘nutritious intake’ from the second line. While Saddil and Egy were not allowed to freely enter the final third of Vietnam’s defense. At least there is a violation if the ball cannot be taken.

Indonesia’s defense also does not learn from mistakes. Fragile in the face of set pieces and two goals from this scheme. Worse, these two goals were created from Van Hau. While one other goal was created by Do Hung Dung via a hard kick from outside the penalty box.