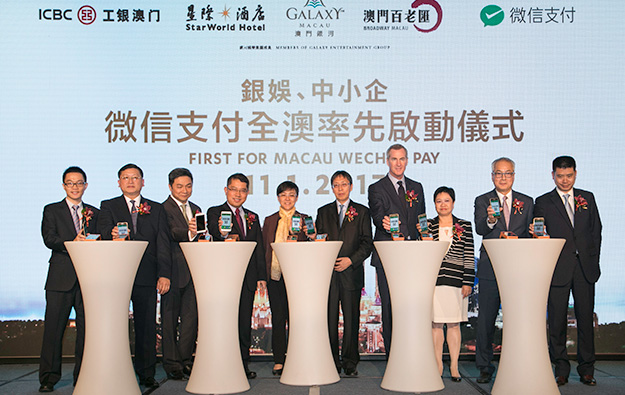 According to a press release, issued by the gaming operator and ICBC (Macau), the mobile payment platform, WeChat Pay, will be available at different venues. The Galaxy Macau, Broadway Macau and Star World Hotel will be honouring the deal between the two.

WeChat Pay is widely used in mainland China for not only social interaction but it has also been a part of their day to day financial dealings. It also provide contactless mobile payments platform inside and outside China for its users.

Tencent Holdings Ltd supported the decision of WeChat Pay application allowing its users to pay securely. It was reported that China has 963 million monthly active users on WeChat as of June 30.

The press release stated that this partnership will “Answers the needs of mainland Chinese visitors to Macau, who overwhelmingly prefer to pay with e-wallets such as WeChat Pay. Guests can now pay with WeChat Pay at a wide range of establishments, with a total of 136 outlets launching the service in phases.” The establishments will include hotels, food, beverage, shops and other entertainment related services through-out Galaxy Entertainment venues.

Several investment analysts, who deals in gaming sectors of Macau, has reportedly declared the Chinese tourists a potential target group for the city casino sector.

GGRAsia, cited the company spokesperson, reported that the new payment method will not be accepted for casino payments inside the Galaxy Entertainment Group Ltd.

Galaxy Entertainment Group Ltd will be the first of its kind, entertainment group in Macau to accept digital currency through WeChat Pay.

The Raymond Yap Yin Min, Senior Director of international premium and mass market development, said, “By launching WeChat Pay across the Galaxy Entertainment properties, we are providing an exclusive opportunity for Macau’s valued mainland China visitors to use a preferred payment method for their comfort, security and convenience.”