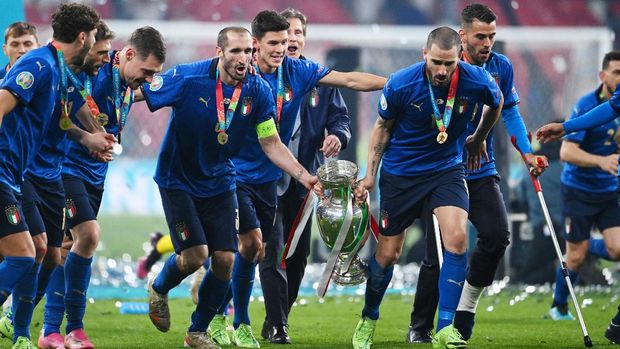 The year 2021 will be marked by a variety of exciting sporting events, from Euro 2020 to the Thomas Cup. Here are five of the world’s best sports moments in 2021.

After being interrupted by the COVID-19 pandemic in 2020, the world of sports began to pulsate as usual this year.

A number of big agendas that should have been carried out in 2020 such as the European Cup and the Olympics can finally be held in 2021.

Not only that, tournament series and regular competitions can also run smoothly, such as MotoGP and Formula 1, although there are still a number of series that have been cancelled.

The same squirming and busyness is also felt in the martial arena. The UFC has been running as usual while the world boxing event has also been busy from the beginning to the end of the year.

The 2020 European Cup (Euro) final which will take place in 2021 brings together a duel between two teams with strong traditions, namely Italy and England.

England, which also acted as the host, had the full support of the fans. During the match lasted 120 minutes, the score was 1-1 so the duel continued to a penalty shootout.

England cheered first because Andrea Belotti failed to score while Harry Maguire successfully carried out his duties so the score was 2-1 for the Three Lions in the shootout.

But then Marcus Rashford and Jadon Sancho failed at the next opportunity while Leonardo Bonucci and Federico Bernardeschi succeeded in carrying out their duties.

England had hope when Jorginho failed to determine Italy’s victory on the fifth kick, but then the victory remained for Italy because Bukayo Saka failed to equalize.

The success of Max Verstappen to become the 2021 F1 world champion happened in a dramatic way.

Before the race in the last series of F1 GP Abu Dhabi, Verstappen and Hamilton had the same value.

When the race was four laps remaining, Hamilton was already leading far in front. But then Williams driver, Nicholas Latifi crashed into the barrier with four laps remaining. This has an impact on the emergence of safety cars on the track.

Verstappen, who had better tire conditions, plus the distance that was close again, was finally able to overtake Hamilton on the last lap when the safety car had left the track.

Verstappen’s victory makes Hamilton temporarily have to postpone his dream of standing alone as the record holder for the most F1 world champions.

Indonesia’s success in winning the 2020 Thomas Cup is one of the best moments of the year.

Coming to Denmark with great disappointment because of failing in the Sudirman Cup, Indonesia was gradually able to rise up in the Thomas Cup.

Indonesia had to struggle when they beat Thailand and Taiwan in the group phase with a score of 3-2.

In the quarter-finals, Indonesia met Malaysia and was able to win 3-0.

A tough test when Indonesia had to face host Denmark in the semifinals. Denmark is known to have a top men’s singles lineup.

But Indonesia was able to get past Denmark’s challenge with a convincing 3-1 victory.

In the final round, Indonesia’s dream to end the long fast of winning the Thomas Cup finally came true. Indonesia successfully beat China, which became the last stumbling block with a landslide score of 3-0.

The third duel between Tyson Fury and Deontay Wilder, which was predicted to be unattractive, turned out to be indisputable.

The Fury vs Wilder duel was hard and fierce since the first round. Wilder first fell in the third round.

However, Wilder managed to retaliate by twice making Fury fall in the fourth round.

5. Gold with Barshim and Tamberi at the Tokyo Olympics

The Tokyo Olympics brought many special moments as well as some record-settings.

Among the many historical events, one of the most memorable moments was when Mutaz Essa Barshim and Gianmarco Tamberi shared the gold medal. What made the moment even more interesting was that the two were close friends.

Barshim and Tamberi both recorded 2.37 meters in the high jump final. Both then failed in a 2.39 meter jump attempt.

Officials had offered one jump opportunity for each athlete but then Barshim asked the official.

“Is the gold medal divisible by two?” Barshim asked the official.

The official nodded his head then said ‘That’s possible’. Barshim and Tamberi then hugged and celebrated each other’s success in winning the gold medal in the high jump at the Tokyo Olympics.