5 Touching Moments at the 2020 Tokyo Olympics

5 Touching Moments at the 2020 Tokyo Olympics 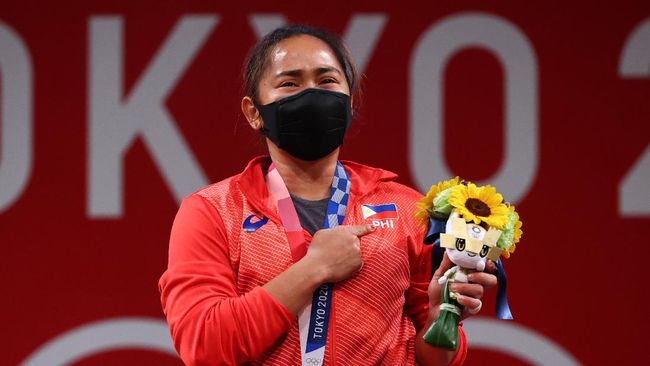 Tokyo 2020 Olympics are entering their fifth day after officially opening on July 23. Here are five touching moments from various sports that have competed for gold medals at this time’s Olympics.

One of the moving stories emerged when the Philippines won the first gold medal in their participation history. That history was inscribed by the female lifter, Hidilyn Diaz after becoming the best in the women’s 55 kilogram class.

In addition, there are success stories of swimmer aged 18, Ahmed Hafnaoui, and fencing athlete from Hong Kong, Edgar Cheung Ka-long, which is also touching. Both of them managed to make a surprise in their respective arenas even though they were in an unseeded position.

Here are 5 touching moments that happened until the fifth day of the Tokyo 2020 Olympics:

The Philippines made history by winning its first gold medal at the Olympics in weightlifting which was inscribed by Hidilyn Diaz at the 2020 Tokyo Olympics.

Hidilyn Diaz won gold in the women’s 55 kg class after defeating Liao Qiuyun of China and Zulfiya Chinshanlo of Kazakhstan.

Diaz’s tears were unstoppable after making sure the gold medal was her. She cried before then hugged her coach.

Diaz won the gold for the first time in the history of the Philippines’ participation in the Olympics. Since their first appearance in this quadrennial event at the 1924 Paris Olympics, the Philippines’ best achievement has only been a silver medal.

History was also successfully created by Nishiya Momiji. The 13-year-old athlete did so after becoming the first women’s gold medal in skateboarding at the 2020 Tokyo Olympics.

In the women’s street final which took place at Ariake Urban Sports Park, Tokyo, Monday (26/7), Momiji made her name in the Olympic history book after recording a score of 15.26.

Before winning a gold medal at the 2020 Tokyo Olympics, Momiji’s best achievement was only winning a silver medal. He made this achievement when he was runner-up in the 2021 skateboarding world championship in Rome, Italy.

Hifumi Abe and Uta Abe set a record as the first brothers from Japan to win gold medals at the 2020 Tokyo Olympics. The Abe brothers set their record in judo at Nippon Budokan, on Sunday (25/7).

Uta ensured the gold medal first when he won the final match against the French representative Amandine Buchard in the 52kg class. His sister’s success was followed by Hifumi who beat Georgia’s representative, Vazha Margvelashvilli in the final in the 66 kg class.

18-year-old swimmer Ahmed Hafnaoui made a surprise appearance by winning the Tokyo 2020 Olympic gold medal from the men’s 400 meters freestyle.

Hafnaoui actually appeared in the men’s 400 meters freestyle with a non-seeded status. He also could only occupy the eighth position in the elimination round with a record time of 3 minutes 48.68 seconds.

Hafnaoui also found it hard to believe his success in winning the gold medal. Moreover, the Tunisian swimmer did not aim to be number one at the Olympics this time.

Hong Kong fencer Edgar Cheung Ka-long made history after winning the gold medal in the men’s individual foil event at the 2020 Tokyo Olympics.

Ka-long secured the gold medal after defeating the Rio 2016 Olympic gold medalist from Italy, Daniele Garozzo by 15-11. This result made Ka-long present the gold medal for Hong Kong which was last won at the 1996 Atlanta Olympics.

“To be honest, I’m not that calm, I don’t know what I can do. It’s like a dream – that’s the reason why everyone thinks I’m staying calm, but actually I don’t know what happened,” said Ka-long as quoted by the Daily Mail.