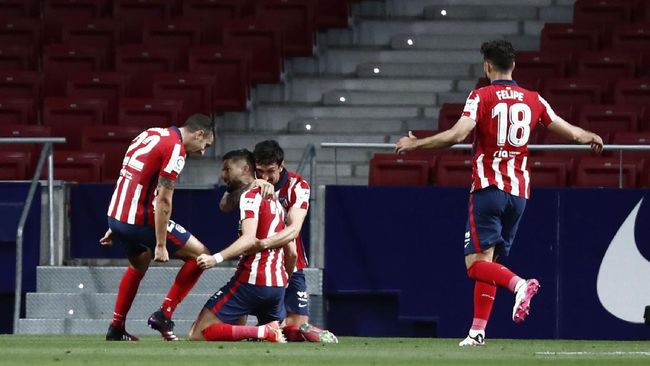 Atletico Madrid won the LaLiga Title after defeating Real Valladolid at the Jose Zorrilla Municipal Stadium in the last match of the LaLiga on Saturday (22/5).

This victory strengthened Atletico Madrid’s position at the top of the LaLiga standings with 86 points as well as sealing the LaLiga title this season.

In this match, Atletico, who were eyeing a fast goal, immediately kicked off the threat from Luis Suarez when the game had only been running for 43 seconds. However, the Valladolid defender could still stop Suarez’s attack.

Suarez again threatened Valladolid’s goal in the 8th minute after his volley was still slightly off the right side of the opponent’s goal.

In the 10th minute, it was Valladolid’s turn to threaten a shot from outside the penalty box released by Toni Villa.

Atletico had to be behind 0-1 in the 18th minute through the action of Valladolid striker Oscar Plano after taking advantage of a counter attack scheme.

Atletico were then able to threaten with a Gimenez header in the 27th minute, but his header was still secured by the Valladolid goalkeeper.

Atletico Madrid had another golden opportunity in the 33rd minute, after Luis Suarez’s shot into the corner of the opponent’s goal was pushed over by the Valladolid goalkeeper.

Entering the second half, Atletico Madrid immediately took the initiative to attack. In the 46th minute, Luis Suarez immediately threatened Valladolid’s goal through Suarez’s header which was still able to be reached by the opposing goalkeeper.

Finally, Atletico Madrid were able to score the equalizer through Correa’s shot in the 57th minute.

In the 62nd minute, it was Valladolid’s turn to spread threats through Shon Weissman’s header, who was still slightly soaring over the Atletico goal.

In the 77th minute, Atletico had the opportunity to increase their lead. Unfortunately, Yannick Carrasco’s shot was still soaring over Valladolid’s goal.

Meanwhile in other matches, Atletico’s rivals Real Madrid also had to fall behind Villarreal.

Villarreal managed to take advantage of the chaos in front of Real Madrid’s goal to give it a 1-0 lead through Yeremi Pino in the 20th minute.

In the 33rd minute Real Madrid also threatened through Luka Modric’s hard shot, who was off the right side of the Villarreal goalkeeper.

In the second half, Real Madrid tried to play more aggressively. In the 55th minute, Real Madrid equalized through Karim Benzema. However, Benzema’s goal was thwarted by VAR.

Benzema scored again in the 87th minute and made the score 1-1.

Real Madrid ended up winning 2-1 over Villarreal through Luka Modric’s goal. However, Real Madrid’s 2-1 victory was still unable to shift Atletico’s position at the top of the standings because they were two points behind Atletico.

Real Madrid had to settle for finishing in second place in the LaLiga final under Atletico Madrid.