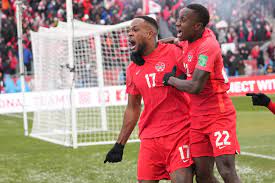 The Canadian national team succeeded in overcoming the Jamaica national team with a landslide score of 4-0 in the 2022 World Cup Qualifications in the CONCACAF zone on Sunday (27/3/2022).

This landslide victory over Jamaica is a very important result for Canada.

Canada, which only needs a point to qualify for the 2022 World Cup, also appears very comfortable. As if unencumbered, John Herdman’s team was able to dominate.

The attack that was built also seemed quite effective. A series of direct opportunities they get thanks to the creativity supplied by their mainstay midfielder.

The deadlock can be solved quickly. The home team led 1-0 through Cyle Larin’s action after utilizing Stephen Eustaquio’s bait in the 13th minute.

The advantage did not make Canada reduce the intensity of the game. The position was again increased to 2-0 after Tajon Buchanan listed his name on the scoreboard in the 44th minute.

Entering the second half, Jamaica, who realized they needed a goal, also appeared to rise. They were able to control the ball and press Canada to hunt for goals.

But unfortunately, they only managed to control the ball. Their attacks are often countered in the final third of the field. They failed to create opportunities until the 70th minute.

The choice to play attack also leaves an empty gap in the defense. Instead of narrowing the position, Jamaica even missed again through the action of Junior Hoilett in the 82nd minute.

Towards the end of the match, Jamaica even had bad luck. The position became 4-0 after Adrian Mariappa made an own goal in the 88th minute.

As a result, the 4-0 score lasted for Canada’s advantage until the referee blew the long whistle.