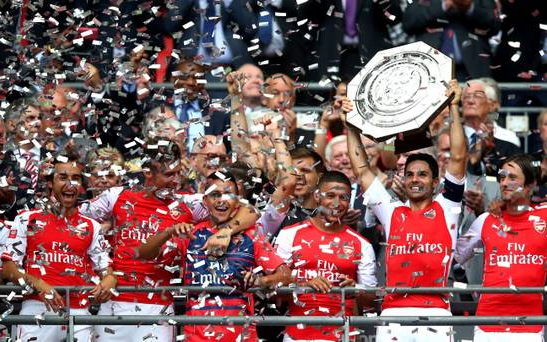 Community Shield, a duel that most of the football fans expect with anxiety, because it represents a certain announcement of the new season of the Premiere League. The match was played 10th of August. Gunners are proud carriers of an FA cup title and Manchester City the champion of England.

Both clubs met only one time to play this match and it was in 1934. when Arsenal won 4:0. Both of the teams were weakened and a number of players couldn’t play at the match. Because of the World Cup on Wembley didn’t perform Mesut Ozil, Per Mertesacker, Lukas Podolski, Tio Volkot (on the side of Arsenal), Bacary Sagna, Sergio Aguero, Pablo Zabaleta, Frank Lampard, Vincent Kompany, Fernandinho, Martin Demichelis and Alvaro Negredo (on the side of Manchester City).

Convincing 3:0 victory of Arsenal over Premier League champions Manchester City began with a first score that was signed by Cazorla. Santi Cazorla scored in the 21st minute through some loosely played defense of the Manchester City players. Santi picked the ball from Sanogo but Dedryck helped Santi find some unused space on his left foot after which it ended in the far corner. Santi was precise and sent the ball to the bottom right-hand corner.

Another minute that was fatal for Manchester City players was 42th, when Ramsey scored with help of Sanogo’s perfect pass and managed to evade Matija Nastasic and open his way through the players to the goal.

Oliver Giroud made a final score for smashing 3:0 after 60 minutes of the match. It was a perfect goal that came from the pass of Wilshere and after that carrying it to the front until he made a 25-yard-shot in order to score. And so he did! The shot passed by Caballero and he couldn’t do anything about it.

Statistics show that Manchester City was in the possession around 58% which is extremely unusual because they looked like they were in a far worse situation.