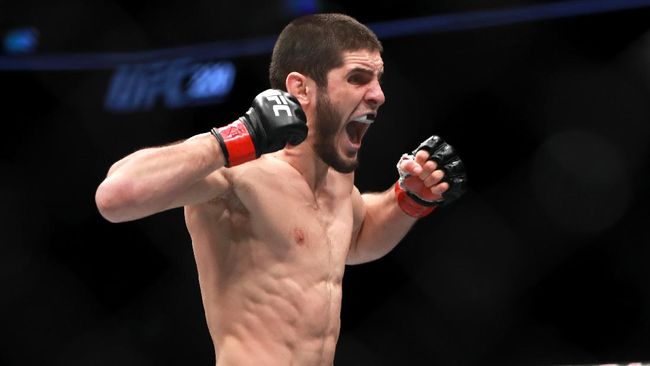 In the first round of the UFC lightweight fight, Moises appeared aggressive with more kicks and punches early in the fight.

Then, Moises tried to bring Makhachev to the corner of the ring and engage his opponent in close combat. Meanwhile, Makhachev prefers to invite Moises to play in the lower battle.

In the second round, Makhachev began to hit hard. On the other hand, Moises prefers to serve with a top fight through punches interspersed with kicks.

Moises then again brought Makhachev into the corner for close combat. In fact, Moises managed to slam Makhachev to invite him in the bottom fight.

This situation was also used by Makhachev to turn to control the fight through the bottom game.

However, Moises was able to build a defense well, making it difficult for Makhachev to attack down.

Although in the possession of Makhachev, Moises was able to survive until the second round ended.

Entering the third round, Makhachev appeared more aggressive by throwing more punches at Moises. Moises looked depressed and locked Makhachev into the corner of the ring.

Makhachev kept trying to get out of Moises’ grip and managed to slam the Brazilian down, but Moises quickly got back on his feet and kept the fight on top.

Makhachev was in control of the fight and managed to get a knee kick into Moises’ face.

In fact, Makhachev managed to get Moises to fight under. However, Moises was still too strong and had a good defense until the third round ended.

In the fourth round, Makhachev looked hotter. One of Makhachev’s kicks landed on Moises’ face. Then Khabib Nurmagomedov’s cousin picked up Moises and then slammed him hard.

In the lower fight, Makhachev was getting fiercer, he beat Moises with hard punches. Makhachev finally managed to finish the fight via a submission victory in the fourth round. This is Makhachev’s eighth straight win.

Meanwhile, in the battle on the co-main card, Miesha Tate came out victorious after winning by TKO over Marion Reneau.

This fight became Miesha Tate’s comeback moment after deciding to be absent for four years and choosing to stay in Singapore. Instead, this was the last duel for Marion Reneau who decided to retire.