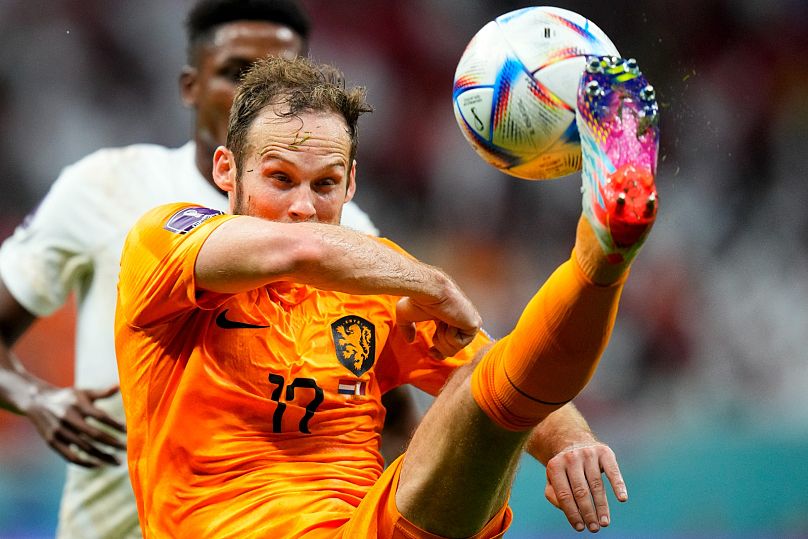 The heavyweight duel, Netherlands vs Argentina, will finally be presented in the quarter-finals of the 2022 World Cup. The Netherlands and Argentina passed the round of 16 after defeating the two countries that call football “soccer”, the United States and Australia.

The Netherlands won convincingly 3-1 over The Yanks USA at the Khalifa International Stadium. The first goal for the Dutch Oranje Team was scored by Memphis Depay with a right-footed shot, grabbing a low cross from Denzel Dumfries.

This is Depay’s 43rd goal for the Oranje team. Making Memphis Depay now the second all-time leading scorer for the Netherlands, surpassing Klaas Jan Huntelaar’s 42 goals. Robin Van Persie with 50 goals, is the creator of the most goals for the Dutch national team.

Entering the first half injury time, Dumfries returned to assist for Daley Blind’s goal. This was Daley Blind’s third goal in 98 caps for the Netherlands. After scoring the goal, Daley immediately ran to hug his father Danny Blind, who was standing beside the field. Danny Blind is the former captain of the Dutch national team, currently serving as assistant coach to Louis Van Gaal

The USA National Team did not want to give up easily. Haji Wright scored a beautiful heel goal in the 76th minute which made it 2-1. The Dutch national team responded quickly. Five minutes later it was Denzel Dumfries’ turn to score, assisted by Daley Blind. The score was 3-1 for the Dutch advantage to last until the referee blew the long whistle marking the end of the game.

The victory of the Orange Team was greeted with fanfare by the Dutch supporters. Including by the Prime Minister of the Netherlands, Mark Rutte. Mark Rutte then mocked the President of the USA, Joe Biden, by tweeting “Sorry Joe, football won”

Several hours earlier, Joe Biden through his official Twitter account made a video supporting The Yanks USA before fighting the Netherlands. In the video, it is as if Biden is catching a ball kicked by the captain of the United States national team, Tyler Adams.

Joe Biden holding the ball then said, “It’s called soccer. Go USA! You guys are going to do it!” Biden did not reply to Mark Rutte’s teasing. But making compliments to the United States national team which just lost to the Netherlands, “Fellas, you made us proud. We got up and kept going. Here’s to a bright future and 2026 back here at home.”

The 2026 World Cup will indeed be held in the United States, which will co-host Mexico and Canada. The Netherlands in the quarter-finals faced arch-rivals, Argentina. This will be the sixth meeting between the two countries in the World Cup.

Argentina seemed to be going to win easily in the last 16 when Lionel Messi scored in the 35th minute, and Julian Alvarez scored against Australia in the 57th minute. For Messi it was the 9th goal in the World Cup. Past the record of 8 goals made by the late Maradona in this tournament.

Messi scored his 9th goal at the World Cup/ photo: FIFA.com
However, Australia provided fierce resistance at the end of the fight. The Socceroos team scored a goal in the 77th minute through Craig Goodwin. Australia came close to adding another goal twice, but was thwarted brilliantly by the Argentinian goalkeeper, Emeliano Martinez.

Additional goal opportunities for Argentina were discarded by Lautaro Martinez who stood free but his shot was far from the target. Making Messi shake his head. Australia was unable to create an equalizer until the end of the game. Australia exited the 2022 World Cup with their heads held high. The Socceroos have always scored goals in Qatar’s four World Cup matches.