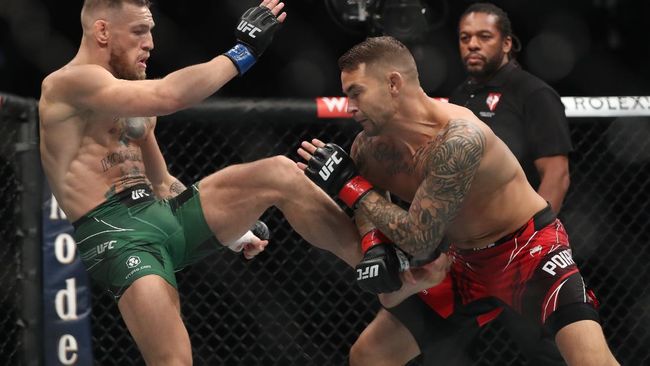 Dustin Poirier won UFC 264 after Conor McGregor broke his left leg late in the first round.

McGregor started the fight with a kick, same thing Poirier did in the second meeting at UFC 257, last January.

Poirier looks calm in the face of McGregor’s combination of kicks. The Diamond successfully unleashed a punch until both fighters were in a ground fighting position.

McGregor had a guillotine choke on Poirier, but the American fighter managed to get out of the pressure. In the lower duel, both McGregor and Poirier both managed to release elbows.

The decision to bring to the bottom of the fight actually cost McGregor. Poirier was able to dominate McGregor through a combination of blows.

Both fighters then stood up with 13 seconds left in the first round. McGregor then fell after breaking his left leg in a misplaced foot while dodging Poirier’s punch.

Referee Herb Dean later declared Poirier the winner after McGregor was unable to stand due to a broken left leg.

McGregor was then annoyed to see Poirier mocking him. Poirier imitated McGregor’s signature gait as he walked towards the fighter nicknamed The Notorious.

In an interview with Joe Rogan while receiving medical treatment aboard the UFC 264, McGregor was furious. The 32-year-old fighter even still invites Poirier to fight with a broken leg.

“I managed to punch him in the head, I managed to kick his leg. He did the usual. This fight isn’t over yet. If it’s got to be done outside the [octagon], let’s do it outside,” McGregor told Poirier.

Before the duel was held McGregor had boasted in an interview with the media. The Irish fighter said he would kill Poirier in this trilogy fight.

“I can accept fighting trash talk, but killing is not something you can play with. He said he was going to kill me, kill me, put me in a coffin,” Poirier said after UFC 264.

“We can’t talk to other people like that. I wish this person a safe return to his family. This person is like dirt, karma doesn’t suck, but karma is a mirror,” Poirier added.