Anthony Martial And The Trail Of Thierry Henry

Home » Soccer » Anthony Martial And The Trail Of Thierry Henry 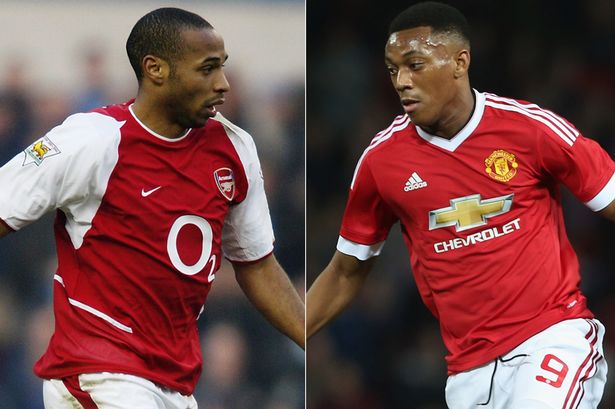 For the majority of football fans, the name Club Omnisports (CO) Les Ulis is somewhat foreign to the fans ear. This is quite reasonable because the club, which was founded in 1977, is now only playing in the fifth division of French football. Even so, it was at this club that two legendary French footballers, Patrice Evra and Thierry Henry, started their football careers.

Like the small team, which is often underestimated and far from being noticed, Les Ulis’s ability to produce young talents is quite complete. Apart from Evra and Henry, this club from a comune in the southwest of Paris is also a place where Anthony Martial and Yaya Sanogo both gain knowledge and hone their skills.

Especially for Martial, he is considered a rare and special talent that Les Ulis once had. This assumption was floated by Martial’s coach at Les Ulis (even to this day), Aziz Benaaddane. “My first memory of Martial? He was very young – maybe six years old – dribbled with precision across the pitch while running towards goal to score. It was impressive. There are 400s of young talent playing for us but only Martial’s level appears once every five to six years”, said Benaaddane as reported by the BBC.

Under the guidance of Benaaddane and his assistant, Mahamadou Niakate, the young Martial was able to show his full potential. Because of this, many top teams are eyeing Martial, both from France and abroad. The new rich club of the English Premier League, Manchester City, even had time to specially invite Martial to come to their training base. The Citizens also admit that they are very interested in Martial.

Martial’s father’s reluctance to let his son wander deep into the land of the people evaporated City’s desire. By his father, Martial was encouraged to stay first in the Land of Wine if the goal was to gain knowledge, improve individual qualities as well as mature his game as a footballer. As a result, the Olympique Lyonnais academy became Martial’s goal after leaving Les Ulis. The choice itself bore fruit because Martial had the widest opportunity to learn there.

Over time, Martial’s energetic, slick and clinical playing style made the public continue to compare him with Henry. Incidentally, like Martial, when playing Henry is not only good at grazing as a center forward but also plays wide from the left —a situation that makes it easy for him to stab from the wings into the center or cut inside and shoot with his strongest foot. But in Niakate’s eyes, the resemblance between the two players from different generations has been seen since Martial was young.

“Martial has very exact characteristics with Henry. Savage in front of the opponent’s net, intelligent, fast, and has a winning mentality”, Niakate told the BBC. The comparison between the two of them got even faster when AS Monaco, the team Henry had played for as a youth, signed him from Lyon. And just like Henry, Martial also managed to show impressive actions while wearing the red-and-white costume typical of Monaco. Uniquely, when they were still in Les Monegasques uniforms, Martial and Henry made their debut wearing the French national team shirt.

When Martial chose England to join Manchester United to continue his career, the public was even louder saying that he was trying to follow Henry’s career. But at this point, there is a gulf between the two because Henry chose Arsenal as his port in Queen Elizabeth’s Country.

Not only that, because Henry’s career with the Gunners has been very enjoyable. In addition to contributing 228 goals in 376 appearances (making him Arsenal’s all-time leading scorer) in all competitions, he has also contributed to two Premier League titles each, the FA Cup and the Community Shield. Arsenal’s loyal fans also named Henry, in a survey conducted on the club’s official website in mid-2008, as the best player for the Gunners in history.

Henry’s top-notch achievements on English soil are not something that Martial or even other players of super quality can easily replicate. The young man born in Massy must fight as much as possible to do so. Successfully annexing various titles with United (so far he has kissed each of the FA Cup, League Cup, Community Shield and Europa League) will bring Martial’s name to life. Especially if his head and feet are diligent in scoring goals after goals.

Henry is Henry, Martial is Martial. But Henry’s phenomenal trail can only be followed by phenomenal players. Can Martial fit into that category? Maybe only time will tell. One thing is for sure, without the hard work and proving on the pitch with the Red Devils, instead of being hailed as a brilliant trailblazer, Martial will be just another shadow of Thierry Henry.