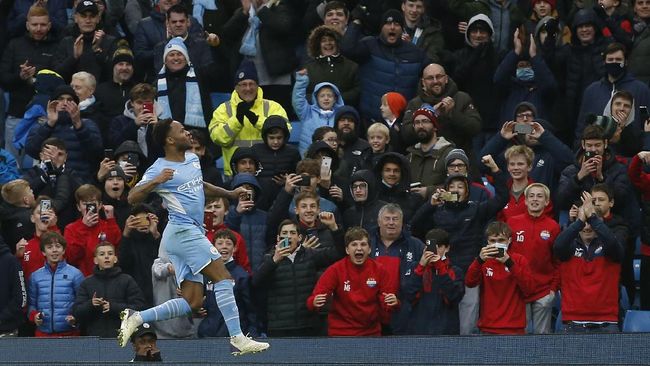 Manchester City won 1-0 over Wolverhampton Wanderers in the 16th week of the Premier League at the Etihad Stadium, Saturday (11/12).

No goals were scored in the first half. Wolves played pretty well. Meanwhile, Man City were not effective in taking advantage of the opportunities they had. Raheem Sterling scored City’s winning goal in the second half.

Man City provided the first threat when the game had only been running for two minutes. Raheem Sterling fired a right footed shot inside the penalty box which Wolverhampton goalkeeper Jose Sa was able to secure.

Efforts to score goals continue to be made by Man City. Other opportunities were also obtained by Bernardo Silva, Jack Grealish, and Joao Cancelo, who had yet to score.

Wolverhampton who continued to be pressed could only threaten the Man City goal in the 23rd minute. The opportunity was obtained by Raul Jimenez through a header utilizing Rayan Ait-Nouri’s bait which was still on the right side of The Citizens goal.

Towards the end of the first half, Wolverhampton had to lose Jimenez. Jimenez’s two yellow cards in 48 seconds meant that the visitors had to play with 10 men and the score remained 0-0 until the first half ended.

Man City, who had the advantage in the number of players, got a golden opportunity through Ilkay Gundogan after utilizing Joao Cancelo’s cross in the 56th minute. However, Gundogan’s header that led to the goal could still be blocked by Wolverhampton captain, Conor Coady.

Man City were awarded a penalty after Joao Moutinho was deemed to have cleared Bernardo Silva’s cross with his hands in the box in the 64th minute.

Sterling, who came forward as a penalty taker, did his job perfectly. Sterling’s kick towards the middle outwit Wolverhampton goalkeeper, Jose Sa, who had already moved to the right of the goal.

In the second half of injury time, Wolverhampton almost scored the equalizer. Daniel Podence’s cross from the left was headed in by Max Kilman but the ball that went into goal could still be anticipated by Ederson.

This result makes Man City stay at the top of the Premier League standings with 38 points. Meanwhile, Wolves are temporarily in 8th position in the standings with 21 points. Wolves’ position is prone to being evicted by other clubs.