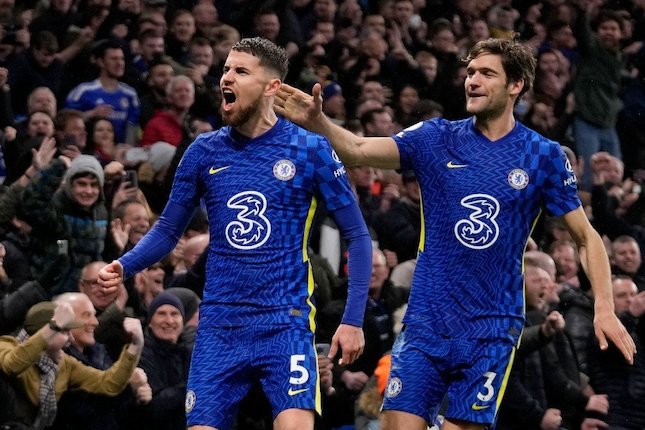 Chelsea dramatically managed to frustrate Leeds United with a tight score of 3-2 in the 2021/22 Premier League match week 16 which was held at Stamford Bridge, Saturday (11/12/2021).

The pursuit of goals occurred in this match. A total of three penalties, two for Chelsea and one for Leeds, were awarded by referee Chris Kavanagh.

Mason Mount equalized for Raphinha before Jorginho put Chelsea ahead. Substitute Joe Gelhardt had equalized the score to 2-2.

When the score seemed to be the final result of this match, Jorginho emerged as the hero of Chelsea’s victory with his goal from the penalty spot.

Thanks to this result, Chelsea still maintain their position in the top three standings with 36 points, while Leeds slumped to 15th position with 16 points.

Despite appearing in the opponent’s cage, Leeds did not show the slightest sense of trepidation. Marcelo Bielsa’s team dared to appear aggressive from the start of the first half.

Leeds also got a number of opportunities, until finally the visitors received a penalty in the 27th minute after VAR considered Marcos Alonso to have violated Daniel James in the forbidden box.

Raphinha who acted as the executioner of the penalty also managed to outwit Edouard Mendy. The goalkeeper from Senegal was made dead by a 12-foot shot by Raphinha.

Chelsea could only equalize in the 42nd minute through Mount’s first time flick, which continued to pull Alonso’s bait. The 1-1 score lasted until halftime.

Entering the second half, Chelsea and Leeds still played a high tempo. 55th minute, Antonio Rudiger fell in the penalty box after a duel with Raphinha.

Initially, referee Chris Kavanagh only gave a corner kick for Chelsea. However, after receiving input from the VAR team and then inspecting the monitor on the touchline, he pointed to the white dot.

Jorginho also stepped forward to take this penalty. His execution was successful in outwitting Leeds goalkeeper Illan Meslier and at the same time bringing Chelsea 2-1 up.

Leeds also tried to reply. Their hard work finally paid off in the 83rd minute when new signing Gelhardt managed to cheat Roberts’ pass into goal.

Entering injury time, Rudiger again fell in the penalty box after being violated by Klich. The referee again pointed to the white dot. Jorginho was again successful in converting this penalty into Chelsea’s winning goal.

Chelsea coach, Thomas Tuchel, did not deny that his team only won luckily against Leeds United. Although Chelsea’s victory was not easy, Tuchel said he was satisfied with the performance shown by Jorginho and others.

“It was a very intense game and I am happy with the way we played in terms of our quality and the effort we showed,” Tuchel told the club’s official website.

Tuchel feels Chelsea deserved to win over Leeds. However, he did not deny that his team was a bit lucky in this match.

“We deserved to win, but of course we were a bit lucky to score at the end of injury time.

“I’m really happy because we came back twice from conceding and showing that kind of character was impressive. We turned things around, which pleased me a lot.”

Chelsea had to fight hard to win over Leeds. Tuchel also gave praise to the players who have shown their character.

“I’m very happy with the players because it was a difficult game and we showed great character both mentally and physically,” he added.

“We only played three days ago in Russia so we don’t have much time to recover in time for this game.”