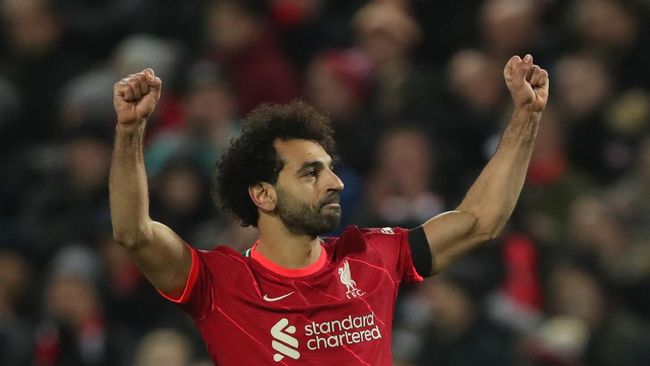 Liverpool managed to beat Aston Villa, which is now being managed by Steven Gerrard, in the 2021/22 Premier League match week 16 which was held at Anfield, Saturday (11/12/2021).

Mohamed Salah’s only goal from a penalty in the second half was enough to bring Liverpool to full points from this match.

Thanks to this result, Liverpool is still sitting in second place in the standings with 37 points, while Aston Villa is ranked 12th with 19 points.

In the first half, Jurgen Klopp’s Liverpool appeared very dominating with the percentage of possession of the ball reaching 62 percent. However, Liverpool looked very frustrated that eight of their shots on goal were not scored.

Quoted from the Premier League website, only three shots from Liverpool players were on target in the first half. On the other hand, Steven Gerrard’s Aston Villa are still struggling to develop the game. Aston Villa, who relied on counter-attacks, were only able to release two shots throughout the first half.

Liverpool tried to appear aggressive from the start of the first half. On the other hand, Gerrard instructed his team to concentrate on stemming the Reds attack.

As a result, although several times were able to penetrate the defense of Aston Villa, Liverpool still made it quite difficult to create dangerous opportunities.

Sadio Mane, Mohamed Salah, and Alex Oxlade-Chamberlain, who this time played as a false nine, took turns spreading threats to the Aston Villa defense. However, no goals were created until the first half was over.

Back from the dressing room, Liverpool did not relax their pressure. Unfortunately, the opportunity for the host through Virgil van Dijk’s action could still be thwarted by Emiliano Martinez.

In the 65th minute, Liverpool were awarded a penalty after Salah was violated by Tyrone Mings in the forbidden box. Salah who became the executor also successfully conquered Martinez. The Reds lead 1-0.

Both teams had opportunities to score in the remaining matches. However, no additional goals were created. The 1-0 score for Liverpool’s victory was the final result of this match.

This result extends Liverpool’s positive trend of always winning to five games in a row in all competitions. The result of this match was Aston Villa’s second defeat in the era of Liverpool’s legendary coaching, Steven Gerrard.

Mohamed Salah was chosen as the best player of this match. Overall, Salah appeared quite impressive in this match by releasing six shots, two of which were on target.

Not only that, Salah also often terrorized the Aston Villa defense by recording four successful dribbles.

Salah’s slick appearance was more complete with his successful acceleration which earned his team a penalty, which he then completed himself into a goal.