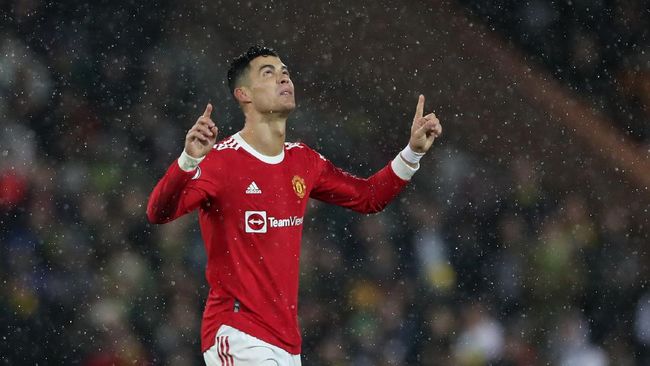 Manchester United won a narrow 1-0 victory over Norwich City through Cristiano Ronaldo’s penalty goal in the 16th week of the Premier League at Carrow Road, Saturday (11/12).

Man United got the first chance to score in the 14th minute. Alex Telles’ free kick that hit the fence was still able to be saved by Norwich goalkeeper Tim Krul.

After that pressure, Man Utd were no longer the dominant team. Norwich, who played in front of the public themselves, appeared confident in dealing with Man Utd, who excelled in individual quality.

Man Utd just got another chance in the middle of the first half. Diogo Dalot who went up to help the attack fired a left footed shot from inside the penalty box that Krul could still tame.

Towards the end of the first half it was Harry Maguire’s turn who had a chance to put his name on the scoreboard. However, Harry Maguire’s header that led to the goal could still be thwarted by Krul who played well under the Norwich bar.

In the second half, Norwich City step on the gas. Just two minutes into the game, the Canaries threatened through Rupp’s shot, but the ball was secured by De Gea.

Norwich continue to press Man United. In the 56th minute, David De Gea was forced to make a fine save to stop Teemu Pukki’s shot.

Manchester United, which was continuously pressed by Norwich, got a ‘luck’ in the 73rd minute, after Cristiano Ronaldo was brought down by Max Aarons in the penalty box. Ronaldo who took the penalty successfully did his job well so that Man United won 1-0.

Conceded did not make Norwich discouraged. The hosts almost equalized a minute after Ronaldo’s goal through Ozan Kabak’s header, but David De Gea made a crucial save that kept the Red Devils from conceding.

Manchester United’s goal was almost broken in the 81st minute. This was because Billy Gilmour fired an accurate shot in the penalty box, but the ball was blocked by Bailly.

Manchester United, who relied on counter-attacks, had one chance to add to their lead, after Marcus Rashford, who had escaped from a Norwich defender, latched onto Cristiano Ronaldo who was in front of goal, but Ronaldo’s shot went high.

In injury time, Manchester United’s goal was almost broken by a header. But De Gea managed to break the opportunity near the near post. The 1-0 score lasted until the referee blew the long whistle signaling the end of the game.

Thanks to this victory, Man United rose to fifth place with 27 points. While Norwich City are still stuck at the bottom of the standings with 10 points.