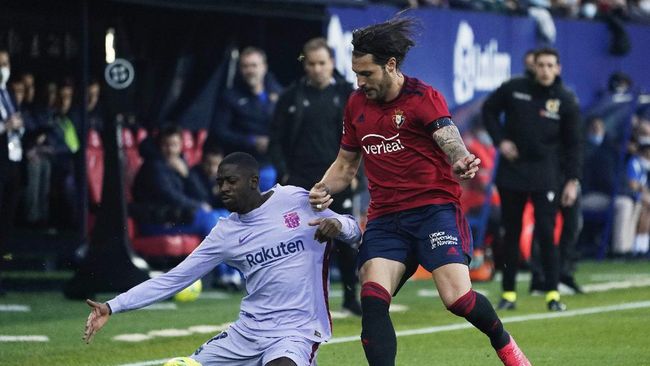 Barcelona had to settle for a 2-2 draw against Osasuna in the LaLiga Santander continued match at El Sadar Stadium, Pamplona, ​​Sunday (12/12).

Barcelona twice won in this match. However, twice that advantage could not be maintained by Xavi’s squad at Osasuna headquarters.

Barcelona opened the scoring in front of the opposing fans when the game had only been running for 12 minutes. The goal that brought the visitors ahead was scored by Nico Gonzalez using Gavi’s breakthrough bait.

Nico Gonzalez’s shot from inside the penalty box which leads to the right corner of the goal is lodged in Sergio Herrera’s goal.

But the lead only lasted two minutes. Osasuna was able to make it 1-1 with a goal scored by David Garcia taking advantage of set pieces.

The match was getting more and more interesting after the score drew 1-1. Barcelona could again take the lead over Osasuna at the start of the second half.

Barcelona won 2-1 through a goal scored by Abdessamad Ezzalzouli in the 49th minute. The 19-year-old’s shot from inside the penalty box took advantage of the counter-attack situation tore the Osasuna goal.

Osasuna did not give up after trailing 1-2. The hard work of the home team paid off because Chimy Avila managed to break into Marc-Andre ter Stegen’s goal with a hard shot from outside the penalty box and made the 2-2 score last until the second half was over.

The draw made Barcelona still stuck in eighth position with 24 points from 16 matches. While Osasuna is ranked 10th with 22 points.

After the match, Barcelona coach, Xavi Hernandez could not hide his disappointment.

He admitted that he was frustrated to see his team conceded at the last minute. “While leading 2-1, we should have kept the ball in our possession, but we didn’t,” said Xavi, quoted from the club’s official website.

Xavi saw his team did not dare to take risks. The Blaugrana pulled back a bit when they took the lead. That gives Osasuna room to develop.

The visitors’ defender, Gerard Pique, also reacted. Overall, Pique thinks his team is playing well. He reflects on the difficult conditions of the Catalan giants lately.

In such circumstances, Barcelona still appear dominant in El Sadar. However, Barcelona have not been able to achieve maximum results.

“We got a point and we are not at all happy with the result,” Pique explained.

That means the Blaugrana failed to win in three consecutive matches. Prior to the duel in Pamplona, ​​Sergio Busquets and his teammates were beaten by Real Betis and Bayern Munich.